« WHIPLASH | Main | THE THEORY OF EVERYTHING » 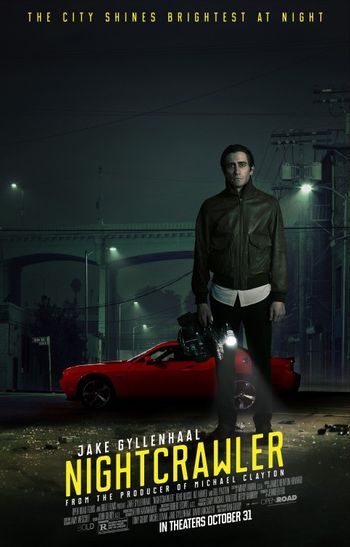 Social satire doesn’t get much darker than it does in “Nightcrawler.” Jake Gyllenhaal lost 30 pounds in order to play Louis Bloom, a devious social misfit who goes from scrap metal thief to self-made video journalist, selling accident and crime footage to a Los Angeles television station. Filmed primarily at night in Los Angeles, “Nightcrawler” feels like a twisted, more engaging, West Coast version of “Bringing Out the Dead.”

Gyllenhaal’s unreliable anti-hero looks like a recently recovered meth addict. He tempers his gaunt wide-eyed persona with polite speech soaked in “the self-esteem movement so popular in schools” and corporate management double-speak. Lou is an autodidactic monster who has risen from the sludge of America’s economic failure and its relentless culture of greed. Lou’s motto is: “if you want to win the lottery, you have to make the money to buy a ticket.” While it’s not stated, Louis Bloom is a radical right-wing tool.

The slogan tells a lot about Lou’s warped value system, which plays out in all sorts of shocking displays of dangerous and selfish behaviors that are all the more appalling for the success that Lou achieves through them. Lou reflects America’s rampant corporate-political model for creating mayhem and profiting from its aftermath.

Screenwriter-turned-director Dan Gilroy (“The Bourne Legacy”) gets deep inside the mind of America’s poisonous organized (read racist) culture of violence-worship. “If it bleeds, it leads” is the famous fear-based ethos of the stereotypical television news station that pays Lou increasingly more for his ethically dubious footage. Lou is not above moving a body at a car crash site to get a better camera angle. He also has a knack for developing strategies on the fly to optimize the value of violent situations. 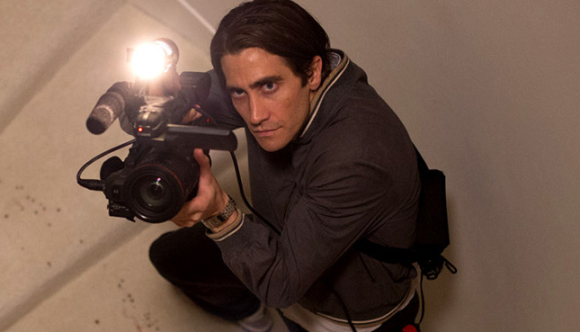 Hiring Richard (Riz Ahmed), a possibly illegal immigrant, as his assistant is the first step in Lou’s plan to corner the market on salacious news footage. Paying Richard $30 a night isn’t as good as paying him nothing as an intern, but Lou knows a sucker when he sees one.

Nina (Rene Russo) is a middle-aged news director at the local news TV station whose ratings rely on the kind of exploitation “news” coverage you see on CNN. Nina’s personally racist editorial vision cherishes “urban crime creeping into the suburbs” as the theme her viewers want to see supported. She informs Lou about her ideal content being a “screaming woman running down the street with her throat slit.”

An ostensibly romantic restaurant negotiation scene, in which Lou blackmails Nina into acting as his sex partner, captures the political climate that enables Lou to work his intimate brand of skullduggery. Witnissing how Lou gets the upper hand on Nina in a seemingly unwinnable situation is as diabolically funny as it is disturbing. 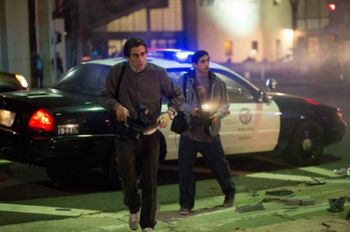 Lou is a mercenary. Building his brand and making money are his priorities. He views people as objects he can manipulate to meet his goals. When Lou says, “today's work culture no longer caters to the job loyalty that could be promised to earlier generations,” it discloses an indisputable American viewpoint of cruel social conditioning.

Jake Gyllenhaal’s canny portrayal delivers a revelatory character study of an opportunistic sociopath working all the angles in a system built on violence-feuled propaganda. Lou Bloom is an ideal agent for the faulty structure because he can manipulate people, places, and images to support the one-percenter’s party line for the masses to absorb. You’ll feel a chill. 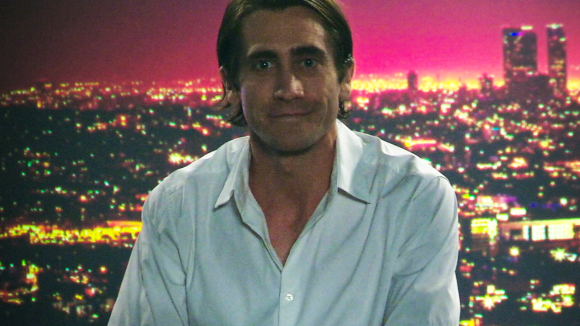