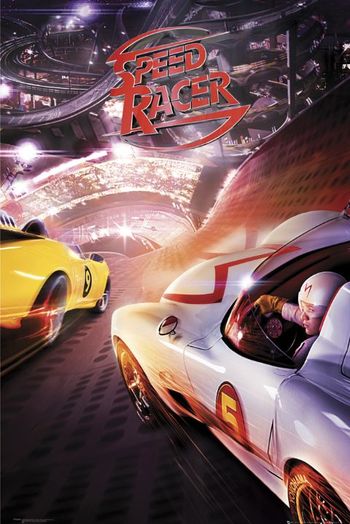 The Wachowskis achieve a divine vision of psychedelic visual ecstasy — you won’t believe the sheer amount of color on the screen at any given time — while digging deep into a campy comic/dramatic tone that speaks to audiences of all ages. Emile Hirsch leads a flawless cast as the title character that carries the death of his car-racing brother Rex Racer (Scott Porter) as a constant inspiration to win races for his family’s racing business. Anti-corporate themes abound as the sport’s predatory company Royalton Industries tries to bring Speed and his family to the dark side of greed. Far-out racing sequences, ninja attacks, and a budding romance between Speed and his girlfriend Trixie (perfectly played by Christina Ricci) attend the trippy visual fun. Like a revved-up turbo mix of Warren Beatty’s “Dick Tracy” with 1982’s “Tron,” “Speed Racer” is a blast from start to finish.

Since ending their Matrix trilogy with a whimper rather than its anticipated bang, the Wachowski Brothers have successfully turned their attention to uniting cartoon logic with live-action appeal. The pay-off is fast and non-stop. Fans of Tatsuo Yoshida’s ‘60s era Japanese anime cartoon series (originally entitled “Mach GoGoGo”) get plenty of positive reinforcement with key story elements, like the functional “A” through “G” buttons on the steering wheel of Speed’s car (the “Mach 5”) and his little brother Spritle’s pet monkey Chim-Chim. The filmmakers are careful to emphasize Spritle (well played by cherubic Paulie Litt) for his amusing little kid qualities of loving candy and constantly trying to prove himself as worthy of adult respect. Spritle and Chim-Chim get plenty of welcomed screen-time, and their constant slapstick shenanigans anchor the movie’s wild racing sequences from a child’s knee-high perspective of seeking fun at every opportunity. 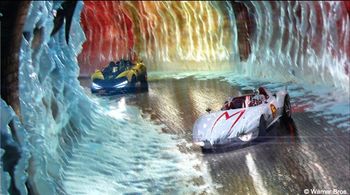 The diabolical Royalton (played by Roger Allam) introduces himself to the Racer family as an effeminate pancake-loving family man who wants nothing more than to provide them with the riches they deserve. But when Royalton gets Speed alone in his office to sign a contract piled high across his desk, we learn the depth of his corporate villainy. Every raced is fixed in Royalton’s worldview. If there is a running theme smuggled into this summer’s family movies (“Iron Man” included), it’s that profit for profit’s sake is to be avoided like the plague.

“Speed Racer” balances between dangerous car race rallies and the nefarious intrigue that surrounds them. A low-fi animated introduction sequence gets us inside the mind of young Speed daydreaming in class about racing with his brother. He doodles car crashes in the pages of his notebook. We are transported to the joys of childhood when all that mattered was how far your imagination could take you away from the mundane realities of homework, chores, and peanut butter & jelly sandwiches — Speed’s mom (Susan Sarandon) makes them by the tray-full. If Speed is a rebel with a one-track mind, it’s an ethic of independence that he consciously inhabits with his family’s united approval.

The movie’s greatest achievement lies in its embrace of a modern family entertainment in a broad yet boiled-down spectrum of soup to nuts humor, action, and unbridled festivity. You can find touches of inspiration drawn from everything from the Three Stooges to Jerry Lewis comedies to the camp humor of Pee-wee Herman. The audience is encouraged to laugh at characters, with characters, and at themselves for being so easily led.

As Susan Sontag wrote, “You can’t do camp on purpose.” Here, the Wachowskis achieve a universal postmodern style and sensibility that comes from a connection between individual ambition and familial trust combined with lots of color and speed. It’s the fastest movie ever made.