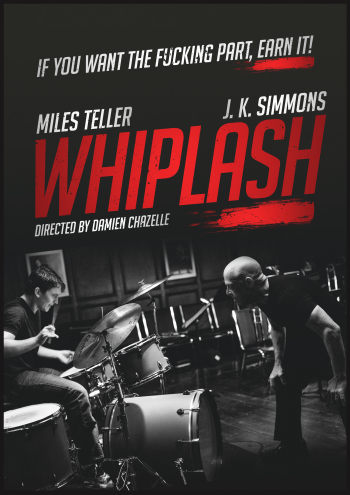 Writer-director Damien Chazelle has made a powerhouse drama about the level of dedication it takes to be great at something. “Whiplash” refers to the title of a complicated 1972 Hank Levy jazz standard played at “double-swing” tempo that Andrew, a drum student at a Juilliard-like music conservatory, strives to master under the abusive tutelage of a bandleader from hell.

Andrew's music instructor, Terrence Fletcher (J.K. Simmons), wants to produce the next jazz great. Little does Mr. Fletcher realize that the reason there hasn’t been another Charlie Parker, Miles Davis, or Duke Ellington to come along in a half-century has more to do with cultural, political, and economic realities than with his flawed trial-by-fire approach to creating the next Be-Bop master. Fletcher chooses to ignore the fact that Miles Davis dropped out of Juilliard during his first semester in exchange for on-the-job training, playing trumpet every night in Charlie Parker's band. 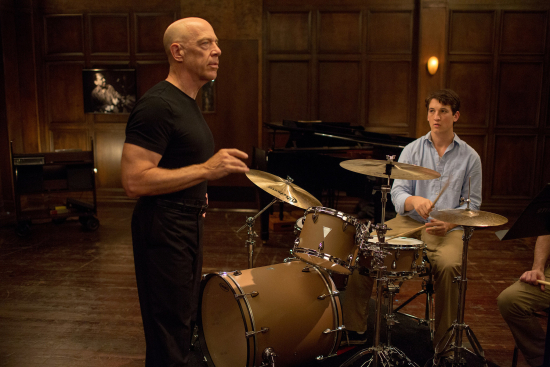 The intimidating Fletcher has personal demons that he likes to release by yelling off-color insults and throwing physical objects, such as folding chairs, at his fearful students. He's a master manipulator who knows how to get under a student's skin. The film misses an otherwise obvious subtexutal opportunity to provide the audience with a glimpse of Fletcher's home-life. We only witness the demanding brute when he's teaching.

The film’s suggestive title implies the “abrupt snapping motion or change of direction resembling the lash of a whip.” Andrew’s treacherous journey toward jazz greatness suffers dramatic reversals under Fletcher’s daily theater of cruelty. Andrew is predisposed to having thick skin by virtue of being raised by a single father in an extended family that prizes achievements in sports above all else.

One of its most telling scenes occurs during a dinner-table discussion where Andrew lets his fangs show regarding a comparison between his musical achievements and his cousins’ football accomplishments. Andrew’s nimble verbal defense mechanisms are as precise as his command of drum rudiments. When Andrew bites back against his family's trite attempts to minimize the results of his hard work, he hands them their ass in compact package tied with a bow. Miles Teller’s performance as Andrew is utterly convincing. The young actor’s drumming is as much a part of the film’s unequivocal success as his acting. Oscar nominations could well be in the offing for both Miles Teller and J.K. Simmons.

The story loses some credibility in the practice methods Andrew uses to achieve the quick tempos that Fletcher imposes to cut heads in his "core" band. Any competent music student knows that working with a metronome is the only way to reliably work up to playing at fast tempos, and sustaining them. And yet, we never once see Andrew working out with a metronome and practice pad. Instead, he attacks his drum kit with such wild abandon that he has to soak his bloody hands in ice water after going though boxes of Band-Aids. Notable too is the film's lack of attention to Andrew's other music classes, which could have given essential insight to the practices of other teachers at the school.

Still, these are minor details in a movie that raises important questions about how greatness is achieved at a time in American culture when all value has been drained out of once highly regarded disciplines such as music, literature, knowledge, etc. 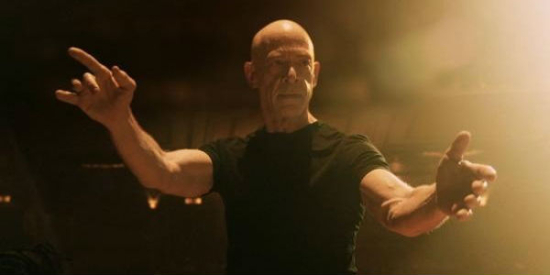 Terrence Fletcher is desperate to hang onto a kind of music (Jazz) that hasn’t had popular venues or audiences to fill them for years. What’s the point of trying hard if you have nowhere to perform the skill you develop? As far as Fletcher’s abysmal approach to teaching; what was the last successful musician you heard of that graduated from a music conservatory?