« THE THEORY OF EVERYTHING | Main | THE HOMESMAN »

What’s Behind the Mask?
True-Crime Drama Shows the Underbelly of Blueblood America 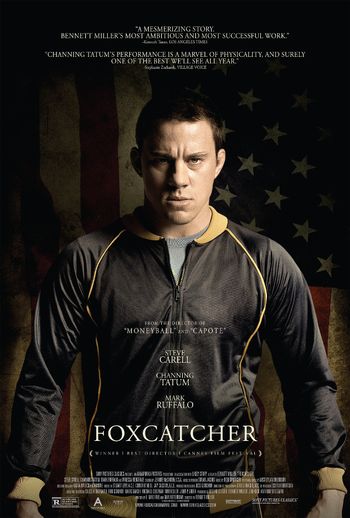 John Eleuthère du Pont‬’s transition from politically connected right wing patriarch of “America’s wealthiest family” to deranged murderer, via a self-appointed Olympic wrestling coach position, is the mysterious progression of Bennett Miller’s nuanced true-crime drama. Look deeper into the film and you’ll find a sobering allegory for a ubiquitous sort of willfully ignorant, privileged, blueblood Republicans buying power in exchange for fleeting moments of futile glory. A machine gun fetishist with his own military tank on an 800-acre estate in Newtown Square, Pennsylvania, John du Pont could be the Republican Party’s ideal poster boy. Like George W. Bush, du Pont also had a fondness for cocaine and serious daddy issues.

A dialogue-free scene observes Olympic wrestling brothers Mark and David Schultz engaged in their daily physical activity of mano y mano wrestling practice in a dingy gym in an economically distressed U.S. town. Throughout the sequence, and the whole of the movie, Bennett Miller artfully uses film language to allow the audience to fill in the open spaces of the narrative form he creates. It’s as if the filmmaker leaves room for the viewer to stand inside the story. 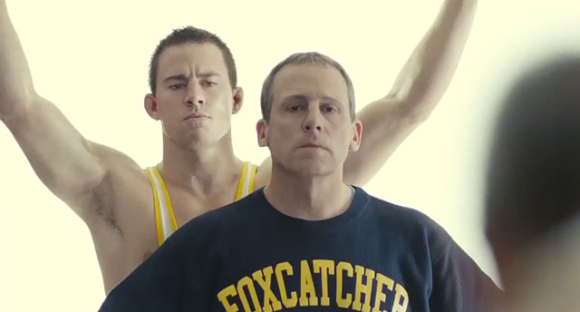 Mark (Channing Tatum) carries a heavy emotional burden that causes him to violently lash out at his brother David (Mark Ruffalo) in a temperamental way that reflects the intimate bond of siblings reliant on one another for their sole source of familial support. Some blood is spilled. No comment is made. Wrestling is a tough sport. David has a wife and kids, but Mark is a profoundly unhappy person. Channing Tatum juts out his lower jaw to display his vulnerable character’s troubled psychological state. Tatum’s acting range is tested in a demanding role that proves him capable of creating complex characters that belie his apparent beefcake persona.

After Mark gives a solemn paid-speech ($20) to a group of school kids about his recent 1984 Olympic wrestling win and the significance of the medal he proudly wears, a school staff member confuses him with his older brother David who also won Olympic Gold in ‘84. Mark’s status as an underachiever living in his brother’s shadow has not gone unnoticed by a certain wealthy exploiter with a strategy for hiring the Schultz brothers to head up a private wrestling program on his family’s Foxcatcher estate. Why does a wealthy dilettante care about having a lot of sweaty young guys in tight-fitting uniforms around him when his controlling mother (exquisitely played by Vanessa Redgrave) considers wrestling a “low” sport? John du Pont exerts that, “Coach is father. Coach is mentor. Coach has great power on an athlete’s life.”

An unexpected call from du Pont interrupts Mark’s daily ramen meal, requesting a meeting for which Mark will be flown first-class to du Pont’s estate. Du Pont shrewdly lets Mark name his price ($25,000) to come live on Foxcatcher Farm to train in the estate’s spacious private wrestling gym in preparation for the upcoming 1988 Olympics in Seoul. Unable to convince his brother David to move his family to Du Pont’s estate to train together, Mark moves in to a well-appointed cottage on the du Pont grounds and begins to train under John du Pont’s dubious tutelage.

In the months that follow, du Pont manipulates Mark into a kept boy with frosted hair and a newly acquired addiction to cocaine. While no sexual overtures are made, a clear homoerotic tension exists in John’s “friendship” with Mark. Their odd relationship is made public during a political dinner in Washington D.C. where Mark publically acknowledges du Pont’s influence as a father in a speech written by du Pont. The intersection of mainstream Republican politics and John du Pont’s carefully orchestrated public relations campaign regarding his self-appointed place in the sports world, points out the ways in which American power glorifies and sustains itself. As Arthur Miller once stated, “Power is power because it doesn’t listen.”

Carell fills the role so completely that you never for an instant question his character’s authenticity. The transformation is complete. More dramatic roles should open up to Steve Carell as one of Hollywood’s better-kept secrets.

Over the course of 16 years, Bennett Miller has traversed the terrain of a rapturous documentary (“The Cruise”), an in-depth biopic character study (“Capote”), a big-budget sports biopic (“Moneyball”), and now a true-crime saga that draws together everything that made his previous films unique, a rigorous approach that provokes questions rather than gives pat answers. “Foxcatcher” is a movie that functions on multiple levels to observe how the American elite use and abuse power toward the destruction of everything it touches. 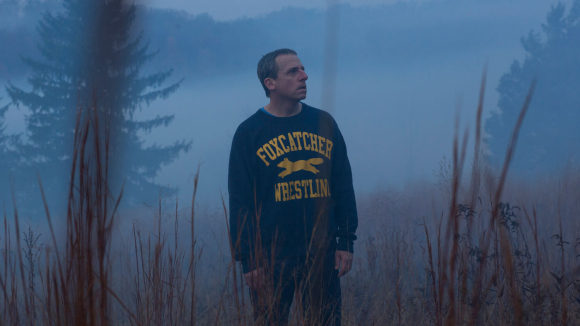