THE THEORY OF EVERYTHING

Not Quite All
Redmayne Wows as Hawking, But Biopic Falls Flat 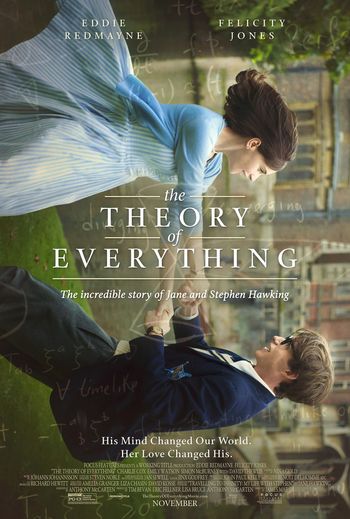 Although it includes an outstanding performance by Eddie Redmayne in the role of the renowned theoretical physicist Stephen Hawking, “The Theory of Everything” is formulaic to a fault. This fractional biopic covers Hawking’s increasingly awkward 25-year marriage to his first wife Jane Wilde (Felicity Jones) in a bland narrative form (based on Jane Hawking’s memoir “Travelling to Infinity: My Life with Stephen”).

However technically beautiful in its photography, locations, and production and costume designs, this film has a hermetic quality that prevents it from hitting the emotional pitch it should. Put it down to the Brits’ famed stiff upper lips, but Anthony McCarten’s script is too guarded for the behind-the-scenes nature of the story at hand. We never even see the couple argue. We get some sense of what’s at stake for Jane from the marriage, but not much of an idea about what the union means to Stephen, beyond having some semblance of a traditional family. Insufficient attention is given to how Hawking relates to his three children.

Despite these flaws, Eddie Redmayne’s spot-on version of Hawking’s gradual but steady physical collapse is astonishing in its visible accuracy and ability to express a range of ideas and emotion from such a limited state of physicality. Redmayne succeeds in introducing Stephen Hawking to audiences in a way that celebrates the visionary thinker both as a vibrant man of the flesh and as one of the greatest scientific minds of the past 50 years. An Oscar nomination should follow.

Hawking’s college days at Oxford in the early ‘60s plunge the intellectually ambitious but lazy student into a cataclysm of events as dramatic as his theories regarding a “space-time singularity in the center of black holes.” Just as his scientific thinking is gaining mathematical traction at college and his relationship with Jane is taking off, Hawking suffers a seizure that exposes a motor neuron disease (“Lou Gehrig’s Disease”) that doctors predict will kill him within two years. Undeterred, Jane admirably dedicates herself to caring for the man she loves with the knowledge that he might die at any moment. 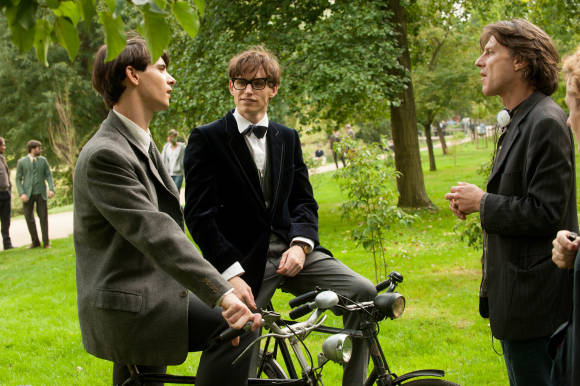 The dire prognosis crystalizes Hawking’s previously undefined field of cosmological study at the University of Cambridge: time. The film articulates well the opposing character traits that attract Stephen and Jane. His atheism sits serenely next to Jane’s Episcopalianism due in part to Stephen’s uncommon trait of being able to entertain scientific theories based on facts while keeping an objective distance from his findings. The couple’s mutual respect and love for one another allows for the birth of their children, but Stephen’s physical limitations are not suited to being an ideal father. In desperate need of help raising their kids, Jane accepts an invitation for such assistance from Jonathan Hellyer Jones (Charlie Cox), a widowed choir director for whom Jane sings in the church choir. With Stephen’s blessing, Jonathan takes on greater familial duties that send the local rumor mill ablaze with conjecture over the interloper’s possibly romantic relationship with Jane. Still, for all of the smoke, there is little fire in this supposed adulterous affair.

Director James Marsh balances the cause and effect of Hawking’s succinctly explained theories as they contribute to a global popularity that puts a wedge between the couple. Most famous for his documentaries (“Man on Wire” and “Project Nim”) Marsh clearly has what it takes to make entertaining films. Here, he has made an ostensibly faithful filmic version of a script that misses several crucial scenes that could have brought some much-needed emotional resonance.

What separates an average biopic such as “The Theory of Everything” from an exceptional one such as Richard Attenborough’s “Chaplin” are the glimpses of flawed traits and behaviors of characters as they correlate to their treatment of others. There is a scene in which Stephen concedes to Jane that there might be a God after all, before informing her that he will travel to America with his romantically attached nurse. It’s the most intimate moment in a film that needed more of the same. 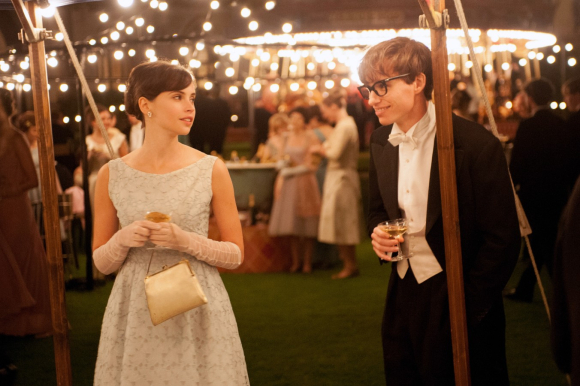