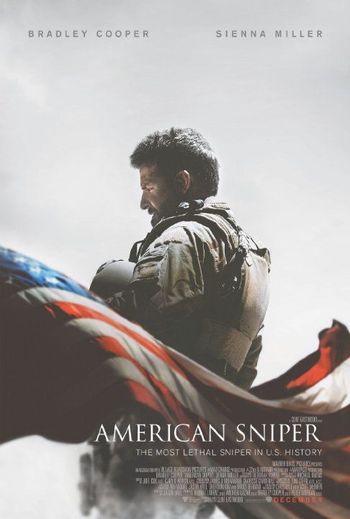 All films are political; all films are propaganda, some more so than others. Imagine a movie entitled “Russian Marksman.” Visualize one named “Israeli Shooter.” These simple titles offhandedly refer to military occupations currently taking place in oppressed countries. As a Palestinian living under occupation, you probably wouldn’t be pleased to see “Israeli Shooter” playing at your local cinema.

These corollary film titles evoke racist ideologies once you consider that modern wars are motivated by imperialist agendas seeking to kill, humiliate, and rob weaker cultures of their natural resources and cultural identities. The capitalist ideology of war is built on the intrinsic basis of racism. So it follows that Hollywood’s current system serves as the corporate-controlled US Government’s most visible means of spreading its xenophobic political agenda next to Fox News. Thanks Warner Brothers; thanks a lot.

“American Sniper” is a war movie built more on fantasy than reality. It would be more correctly categorized in the war fantasy genre shared by films such as Jack Starrett’s “The Losers” (1970) or Quentin Tarantino’s “Inglorious Basterds.” If you want to see recent movies that fit more accurately into the war genre designation you could check out Kimberly Peirce’s “Stop-Loss” (2008) or Paul Haggis’s “In the Valley of Elah” (2007). “Stop-Loss” is especially germane to “American Sniper” because it exposes the U.S. military’s treacherous and unprecedented policy of sending soldiers back for two, three, four, or more tours of duty, pushing combatants past their breaking points and into walking time-bombs. Chris Kyle, this film’s real-life sniper, completed four tours of duty in Iraq. The average US soldier in Vietnam completed just one tour of duty, as did soldiers in World War II and the Korean War.

One of the film’s most egregious examples of manufactured fiction occurs in the guise of a “rival” Iraqi sniper named Mustafa (Sammy Sheik) who presents Chris Kyle with an all-encompassing focal point of mirror reflection. The cartoonish construct of the Mustafa character sends a clear signal about the film’s crude level of disinformation.

It’s revealing that Senator John McCain felt obligated to speak up in defense of “American Sniper,” a one-note piece of cinematic propaganda so obnoxious that it threatens to undermine the very nature of its intended effect. The Hollywood military scriptwriting machine can’t compete with Paul Verhoeven when it comes to creating nuanced cinematic propaganda; see “Starship Troopers,” a brilliant example of antiwar satire.

In the same way that the Internet has liberated hordes of people from the oppression of religious doctrine (atheism has exploded exponentially around the globe in the past 10 years), it is possible that “American Sniper’s” enormous box office success will backfire as more people wake up to the con game that America’s corporate political military junta is running. Consider Scientology’s “prison of belief.” Their membership is in steady decline since the Internet exposed the Scientology con game for what it is. “American Sniper” is catching a wellspring of justified criticism that the movie is doomed to soak in forever more.

The U.S. Government’s long-running collaboration with Hollywood dates back to War World II. Recent war films such as “Black Hawk Down” (2001), and “United 93” (2006) wear their obvious political ideologies on their sleeves. Still, many American movie audiences buy (hook, line, and sinker) every piece of spoon-fed text and subtext they’re given as gospel truth. Coincidentally, the US military refers to its “Hooyah”-happy soldiers as “true believers.” Nevermind that the shallow pond of every soldier’s belief system is built entirely on misrepresentation. Chris Kyle believes he is fighting in Iraq to avenge 9/11, of all things. (Iraq had nothing to do with 9/11.) Cue the sad trombone. He would have been better off selling his soul to the Church of Scientology.

U.S. soldiers have a lot in common with religious zealots; their blind faith enables them to kill without question. Chris Kyle sported a blood-red Crusader cross tattoo to make his Christian faith obvious to those around him. He worships at a bloody altar. In “American Sniper” hero worship is everything. Chris Kyle is nicknamed Legend. We hear the tag a lot throughout the film. “Savages” is the epithet applied to the Iraqi freedom fighters that oppose their US occupiers in once-vibrant cities that are now reduced to rubble.

Chris Kyle’s “first kill” is a child soldier whose mother passes him a grenade to throw at a crew of heavily armed American soldiers stationed around an armored security vehicle. How and why does it occur that the film’s intended American audience doesn’t choose to empathize with the brave Iraqi mother and child whose military-aged male relatives and friends have all been killed or hauled off to prison? Gilo Pontecorvo’s classic 1966 resistance film “The Battle of Algiers” eloquently addresses this question with a cinema vérité-styled depiction of the French occupation of Algeria. “The Battle of Algiers” extrapolates on historic truisms regarding occupations from the perspective of the occupied freedom fighters, i.e. occupied people, always fight harder and better than their occupiers because they have more at stake. And, in the end, resistance fighters always win. Take Afghanistan for example. The British couldn’t take it despite three attempts; the Russians got chased out; and now the Taliban are stronger than ever after handing the American military's ass on a sand-covered plate, albeit it in trillions of pieces. 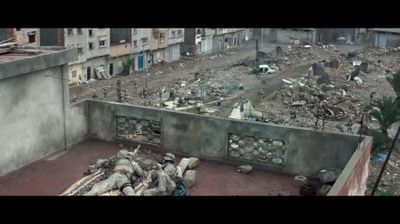 How would you respond if you were put in a similar situation, in which most of your town’s buildings had been leveled by foreign occupiers who can’t even speak your language and yet kick in your doors at 5am to violate your every mode of dignity? History has proven time again and time again exactly how you would respond, just like the desperate mother and son that we see Chris Kyle kill with single shots from his well-hidden sniper’s position. Clearly, he was not a student of history.

In his book, Chris Kyle said that he was “not a fan of politics.” He failed to see, however, that he was its victim. A particularly repulsive scene in “American Sniper” shows Chris’s father at the dinner table with his wife and two young sons. Dad preaches a brand of Christian indoctrination as dogmatic and dubious as anything in Islamic scripture when he distills humanity into three types: sheep, sheepdogs, and wolves. Papa Kyle detests bullies, and yet fails to recognize his own reflection in their mirror. The ferociously angry father insists that his sons be sheepdogs protecting those weaker than them. Throughout the film, Chris Kyle repeats his vociferous desire to protect his fellow soldiers, unrepentant bullies like him, whom he mistakes for guardians of America. He talks as if he is the oppressed freedom fighter doing battle with occupiers on his own home soil. Talk about twisted and confused.

Forget that America went to war with Iraq under false pretenses concerning non-existent “weapons of mass destruction,” or that the Big Oil interests that pushed for Bush Junior’s invasion of Iraq led Americans to believe that the Iraq War was directly linked to avenging the perpetrators of 9/11. Everybody and his sister knows that the Iraq war was always only ever about oil and the ever-growing greed of the military industrial complex.

“American Sniper” is an artless nuance-free hate piece built on insultingly unsound narrative ground. That Clint Eastwood got roped in to be a party to such a nasty bit of business will forever tarnish his career, but who cares? As long as patriotic (read sheep-like) American audiences walk around with shouts of “hooyah” (“Heard—Understood—Acknowledged”) rattling around in their dumb little heads, then America’s corporate political military junta has done its job. Their big mistake lies in presuming that Americans are that “dumb” to begin with. Message to the Hollywood political military junta: we know more than you do, and we know what to do with our knowledge.