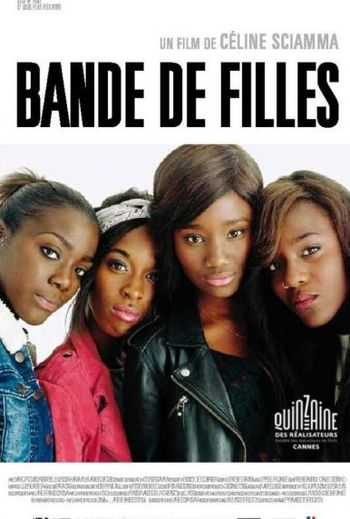 You might read the title “Girlhood” and think that some ambitious (perhaps female) filmmaker is taking on Richard Linklater at his most recent game. Indeed, if you consider Céline Sciamma’s substantial pedigree, as the masterful writer-director behind such youth-centric LGBT triumphs as “Water Lilies” and “Tomboy,” you could arrive at the conclusion that Richard Linklater has been taking some notes from her.

Sciamma conjures an urgent social atmosphere of transformation that resonates with an energy not unlike Cassavetes' early films.

When compared to her first two tour de force films, “Girlhood” reveals itself to be every bit as insightful and authentic a cinematic representation of a personal female coming-of-age experience in modern-day France. For the record, “Girlhood” stands up well opposite Linklater’s “Boyhood” as another essential filmic chapter in the global political, socioeconomic, and cultural challenges facing young people in the 21st century, albeit from vastly different cultural backgrounds.

Newcomer Karidja Touré plays Marieme (a.k.a. Vic), a shy 16-year-old black girl living with her younger sister, their physically and psychologically abusive older brother, and his young daughter, in a low-income housing project on the outskirts of Paris. Karidja Touré is a force of nature on par with Adèle Exarchopoulos, the unforgettable actress from “Blue is the Warmest Color.” Both actresses embody a feminine mystique best celebrated on the big screen. While it may seem premature to deem Karidja Touré’s performance in “Girlhood” a breakthrough success, that is precisely what it is. 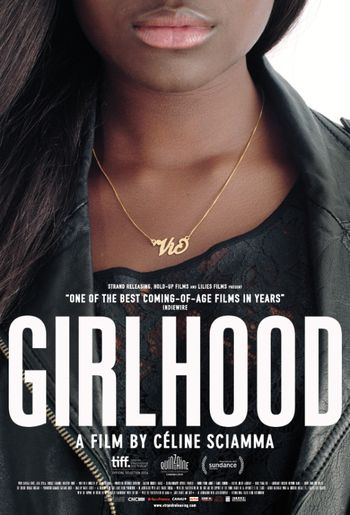 Having failed the same grade two years in a row, Marieme is at a crossroads. Her grades are too low for her to advance into high school. A counselor informs Marieme that vocational training is her only option. Sciamma’s static camera faces the worried Marieme so that we never see the faceless bureaucrat with whom Marieme pleads. “It’s not my fault,” she says. The stern counselor replies, “So whose fault is it, Marieme?” It’s clear that unseen systemic social forces are pushing Marieme into a life in which she will have increasingly less control. Marieme’s immediate need for social acceptance and familial support sends her into the life of a girl-gang member, where she can recast her identity as a person in charge of her fate, however dubious that future may be.

Lady (Assa Sylla), Lindsay (Karamoh Adiatou), and Fily (Marietou Touré) are a gang of tough black chics who accept Marieme into their clique. With the gift of a cheap necklace they recast Marieme as “Vic.” The charismatic girls wear their hair straightened, a look that the braided Vic soon adopts. It is the first of several transformations that Vic will undergo over the course the film’s distinct four-act structure. 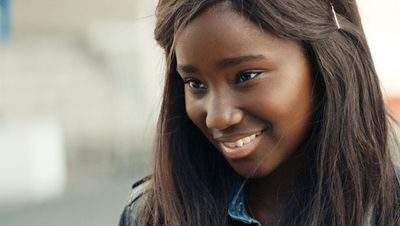 Vic extorts money from high school girls by bullying them with her older physique and aggressive attitude she learned from her domineering brother. She hands over extorted euros to Lady, the gang’s leader. With the money, the girls live out their role-play ambitions as beloved pop stars when they dance and lip-sync along to Rihanna’s “Diamonds” in the privacy of a plush hotel room where they model freshly stolen dresses, smoke pot, and drink booze. Filmed under a blue filter, the longingly dynamic sequence captures glimpses of the girls’ innate potential as beauty objects for commodification.

Increasingly, Vic makes decisions that cross social taboos and expose her to new dangers. As with Céline Sciamma’s other films, the filmmaker gracefully avoids judging her characters’ actions, behaviors, and choices. Vic experiments with bisexuality, drug selling, and a romantic relationship with a boy with whom she has been smitten for some time. The mystery of Vic’s transition from girlhood into adulthood is tempered by the bold choices she makes. Vic is getting better at making informed decisions. “Girlhood” is a stunner.