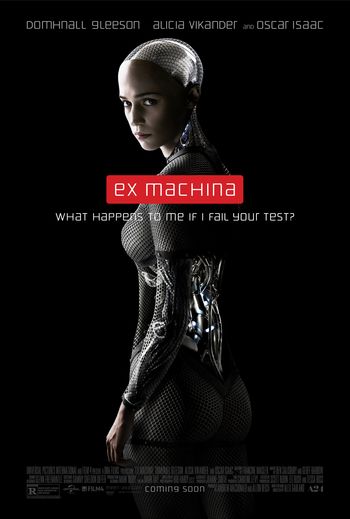 Science fiction has been a dying film genre in recent years. Largely this is because there are too few screenwriters or filmmakers with the imaginations to create compelling futuristic stories. Alex Garland has been an exception to the rule. The screenwriter behind “28 Days Later” (the best recent zombie movie) and “Sunshine” (the finest sci-fi film of the 21st century) crosses over to directing duties for Ex Machina, a film he also wrote.

Smart, sexy, and back-loaded with a terrific twist ending, “Ex Machina” is an elegant sci-fi movie that considers the possibilities of artificial intelligence in thought-provoking ways. The stark narrative is essentially a three-hander for actors Domhnall Gleeson, Oscar Isaac, and Alicia Vikander to play out their diametrically opposed characters in an isolated “No Exit” game of winner-take-all.

Lottery winner Caleb (Gleeson) is a computer programmer nerd brought in by helicopter to spend a week at a remote bunker-styled research facility with his reclusive employer Nathan Garrick (Isaac), the CEO of the world’s largest Internet provider. All concrete walls and bulletproof floor-to-ceiling glass, Nathan’s modern pad looks like a Frank Lloyd Wright design on steroids. The picture’s production designs are stunning in their simplicity. This is a movie to be savored. 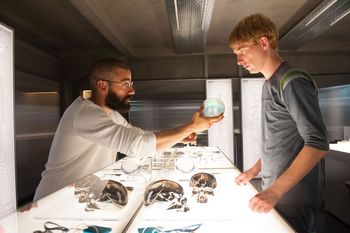 Nathan has been busy working on a svelte semi-transparent robot he names Ava (Alicia Vikander). Caleb’s assignment is to evaluate Ava’s artificial intelligence using the classic Turing test to determine her ability to act as a convincing human being. Ava’s wiring and mechanics are visible, especially in her midriff. Only Ava’s face and hands have a flesh-like quality. Still, the suggestible Nathan can hardly resist her charms, which come through Ava's seductively modulated voice. Alicia Vikander has the savvy to adjust her character’s nth degrees of emotional and intellectual expressiveness. Ava may never go beyond lukewarm, but oh the joys of that barely alive state when it comes in such a fascinating context as a full-featured female robot. Nathan is quick to inform Caleb that he can indeed make penetrable love to Ava, if he so chooses. You can sense Ava becoming exponentially more human with every encounter she has with Caleb. How human she can become is the film’s burning question.

Oscar Isaac has a field day playing Nathan, a mad scientist whose hot-and-cold personality veers to the Machiavellian. Regardless of how much Caleb knows that he is light years out of his league, he can’t help but fall deeper into a trap that comes to resemble mankind’s not too distant future.