TALES OF THE GRIM SLEEPER 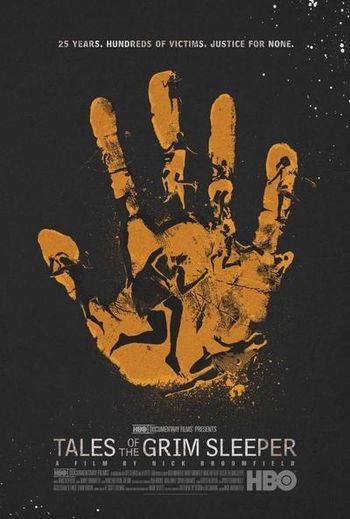 Nick Broomfield is a hack documentarian with a penchant for exploitation and a nose for blood. Famous for such down-and-dirty documentaries as “Kurt & Courtney” (about the doomed Nirvana lead singer and his wife) and “Aileen: Life and Death of a Serial Killer” (about Florida prostitute and serial murderess Aileen Wuornos) Broomfield is a British, poor man’s version of Werner Herzog. Broomfield can’t help but put himself front and center. For better and for worse, he vies for as much attention as he gives his subject. He doesn’t know how to self-edit and he doesn’t care to learn. What he is is prolific, and lucky. He has a way of blundering into rich material from time to time. Broomfield has made at least 27 documentaries since 1996. Moreover, he is tireless when it comes to the number of people he's willing to interview for a project.

It helps to be armed with this knowledge going into “Tales of the Grim Sleeper,” so as not to be distracted from the illuminating social subtext that Broomfield uncovers with his clumsy, albeit hungry, filmic shovel.

Arriving at a time in American politics when black citizens are bullied, brutalized, incarcerated, disappeared, and murdered daily by the country’s legally-immune militarized police force — and the white-dominated media is actually paying attention — “Grim Sleeper” uncovers another dark secret of systemic racist abuse that points to genocide by degree. The LAPD’s conscious neglect of the female murder victims of one of Los Angeles’s most active serial killers over a 20-year period is enough to make you sick. 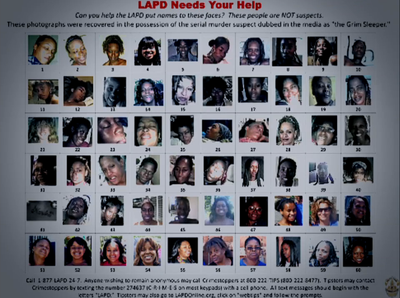 South Central, L.A. resident Lonnie Franklin Jr. was arrested in 2010 on suspicion of killing 10 women during 25 years, beginning in 1985. (Cops and journalists called Franklin "the Grim Sleeper" due to a long gap in the killings, unusual for serial killers.) He is still awaiting trial. As we discover in the documentary, the true number of Franklin’s black female victims was likely north of 150. Had it not been for Christine Peilsek’s investigative cover feature for L.A. Weekly in 2008, it’s likely that Franklin would still be at large, and that more black women would have been killed (his preferred methods were strangulation and shooting with his trademark .25-caliber handgun). Lonnie Franklin Jr.’s killing spree contributed to South Central’s reputation as having the highest homicide rate in all of Los Angeles County, yet the LAPD wasn’t concerned with catching him, or even acknowledging that a serial killer was on the loose.

Broomfield prowls the sunny crime-riddled neighborhood where Franklin lived and carried out his murderous activities against “crack whores,” many of whom he lured with drugs and alcohol to have sex with, or to pose nude for the amateur camera club that he shared with his neighborhood pals Steve, Gary, and Richard. Returning interviews with Franklin’s buddies, who initially stand up for their friend, gradually turn to condemning facts that point to a sick individual on a lethal revenge crusade against women. Questions about how much his wife or teenaged son knew about his activities hang in the air. Even the otherwise gregarious Broomfield doesn’t have the guts to approach Lonnie Franklin Jr.’s wife about her husband’s strange habits. 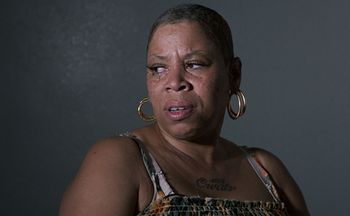 The filmmaker gets lucky when he wins over Pamela Brooks, a retired prostitute and recovered drug addict whose survival skills are something to behold. Brooks is one tough broad, and she fearlessly leads Broomfield’s efforts to track down other women who had run-ins with Franklin during the years when he would patrol the neighborhood in a “church van” or a hatchback Pinto looking for women to woo and attack.

The documentary hits another gear of revelations as Brooks brings forth survivors of Franklin’s attacks to describe their near-death encounters.

“Tales of the Grim Sleeper” throws another damning chapter of accusations at America’s openly racist authoritarian system that surreptitiously condones the murder of its black citizens. Call it what it is, genocide-by-degree.