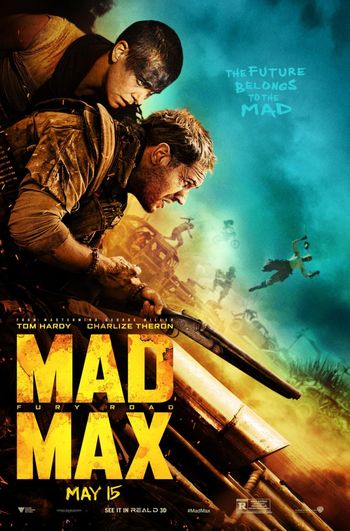 “Mad Max Fury Road” makes up for what it lacks in storyline and character development with a groundbreaking blend of feminist politics and action-movie tropes in a broad physical spectacle featuring death-defying stunts atop and between a constantly moving canvas of motor-driven insanity. Even the set design kills. The film’s imaginatively redesigned vehicles (check out a muscle car transformed into a tank with caterpillar tracks for wheels, and a long-spiked dune buggy that looks like something out of Roger Corman’s “Death Race 2000”) expand the thematic blood-work on display. The cars themselves are fully developed characters. The “Gigahorse” is a six-wheeled behemoth made up of two fin-tailed Cadillacs stuck together with mounted rifle stands attached on its back. If this doesn’t sound like fascinating stuff, think again.

George Miller (the creator and director of all of the films in the “Mad Max” franchise, of which this is the fourth installment) delivers a shamelessly badass rock ‘n’ roll dystopian chase movie —nothing more and nothing less. This is a movie in which to get lost for the pure joy of sitting in the middle of sand-in-your-face action cinema. The term “popcorn movie” has a new defining model. 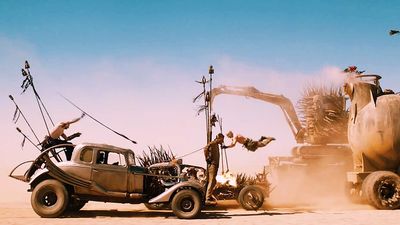 The not-so-secret aspect of “Fury Road” (love the sound of that title) that makes its dusty orange, sun-drenched nonstop-action so engaging and exciting is Miller’s bold decision to eschew (as much as possible) computer-generated-imagery in favor of the trusty old-school approach he famously used in the other films in the series (“Mad Max” 1979, “Mad Max: The Road Warrior” 1981, and “Mad Max Beyond Thunderdome” 1985).

“Fury Road” is to cinema as the Ramones’s “Teenage Lobotomy” was to rock ‘n’ roll. The picture’s deceptive depth lies in its blistering backbeat of fast-paced action fulfilled by a cast of gnarly Wild West-inspired characters “living to die and dying to live.” A lack of water and oil has turned humanity into hordes of people living by their primal instincts.

When bodies fly fast through the air to crash onto hot sand, you can’t help but wonder how the stuntman survived. When an enormous car-flipping crash involving several large beefed-up vehicles explodes into giant red balls of fire on the big screen, the dynamic feat on display boggles your mind and tweaks your eyes. Miller reinvents his own cinema (the same one he invented in 1979). He stays true to his ferociously kinetic filmic vision by drawing from rich classic sources, such as Buster Keaton’s 1926 comedy “The General.” 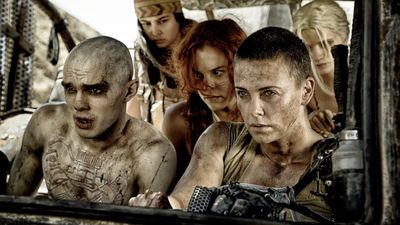 Miller proudly announces “Fury Road” as a feminist think piece. Charlize Theron’s implacable bionic-armed heroine Imperator Furiosa leads the lion’s share of the action. The steely Furiosa turns a fuel-delivery (via the giant oil truck she drives) into a rescue mission to transport five “wives” to Immortan Joe (played by Hugh Keays-Byrne in a franchise return), the demonic despot who controls the flow of water to the starving masses. The Australian filmmaker balances the motherly power of femininity with tougher aspects of womanhood, namely a cold-blooded will to kick serious ass LAMF. Instant cult classic? You bet. 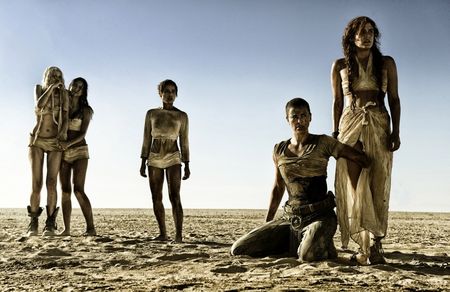 Posted by Cole Smithey at 12:59:05 PM in Action/Adventure