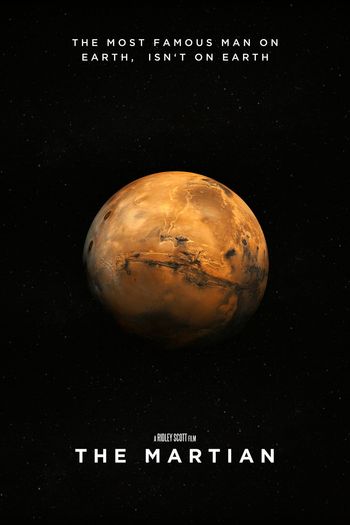 MATT DAMON HAS A PICNIC ON MARS

Matt Damon manages to carry off a movie based on selfie-style video narration, in which he cracks wise about his job as an astronaut botanist, a gig that trains him to grow potatoes on Mars in time of need. Good to know. You probably knew that already, just as you’ll find every blatantly announced plot point as predictable as a pimple roasting under Mars’ red-orange sun. “The Martian” is visually stunning for its realistic-seeming depiction of Mars’ rugged landscape, but its stock script calls for every cliché in the book to be carried out with the possible exception of the chase scene that culminates in a knocked-over food cart. You’d think they could flip at least one cliché, but no. This narrative is gooey smooth like an oyster, without a grain of sand with which to make a pearl.

After getting abandoned on Mars because his storm-escaping crew left him for dead, Damon’s ever-resilient Mark Watney pulls himself up by his bootstraps. Some self-surgery is called for in a scene that gives “Alien” director (Ridley Scott) license to make his audience groan in mock pain at the not-so-bloody mess of a gaping hole Matt Damon’s belly. Mark gets to work amending his limited stock of food with the potatoes he grows inside an clever makeshift greenhouse using his own feces. His plan is to survive long enough for a rescue mission to come get him, or at least for a provisions delivery to arrive. 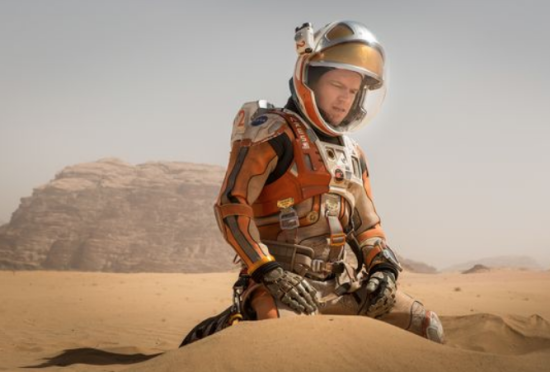 Since this movie is scripted by “Cabin in the Woods” screenwriter Drew Goddard, there must be dry humor, but alas, not in a good way. Poor Mark is stuck listening to the disco music that his captain, Melissa Lewis (Jessica Chastain), left behind. This pop culture distraction allows Ridley Scott to go slumming with music montage sequences that torpedo the movie each time one pops up.

Watching Watney audibly refuse to “turn the beat around” is an awful deployment of hack irony. It would have been better if the Captain’s favorite music had been Punk, so the audience could at least have something cool to listen to while judging Mark Watney’s taste as less than admirable. But that would require contrast or resonance, elements this bloated sci-fi picture lacks. David Bowie’s “Starman” and Gloria Gaynor’s “I Will Survive” arrive as inevitable musical statements that overshadow the ostensibly suspenseful action of NASA trying to figure out how to save their favorite little Martian so very far away. 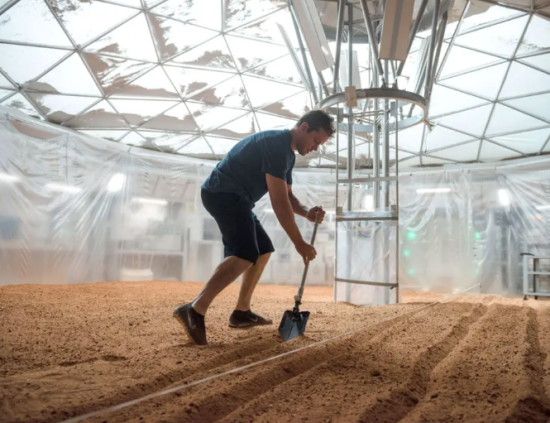 For a sci-fi escape movie, Mark Watney barely breaks a sweat as he whiles away hundreds of “Sols” (the Mars version of a day which is, well, the same as ours). He’s never anything less than confident in his ability to “science the shit out of" his predicament. It reflects an attitude that politicians express toward Global Warming. When things get really bad, “we can science the shit out of it,” and spend lots of cash on Government contracts for bogus companies to cash checks rather than do anything to address the causes of the crisis. 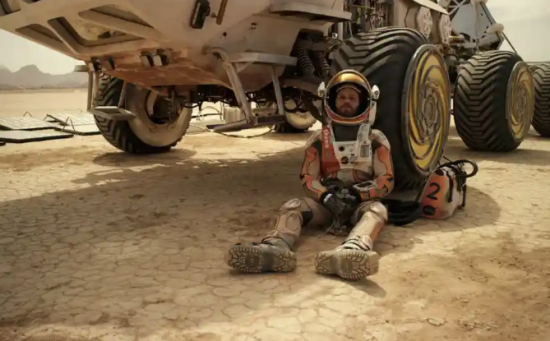 Other than its enslavement to formula, the other stab to the film’s spine is Jeff Daniels jaw-dropping miscasting as the Head of NASA. Even Russell Crowe or Woody Harrelson would have been better cast in the part. Daniels seems to be running on the fumes of an Aaron Sorkin hangover (see television’s “The Newsroom”). Other ensemble casting choices work better; Kristen Wiig is great playing against type; Michael Pena and Chiwetel Ejiofor turn in enjoyable performances, as does Donald Glover as a NASA nerd with a gift for numbers. Supporting actors Kate Mara, Sean Bean, and Mackenzie Davis each give laudable performances. 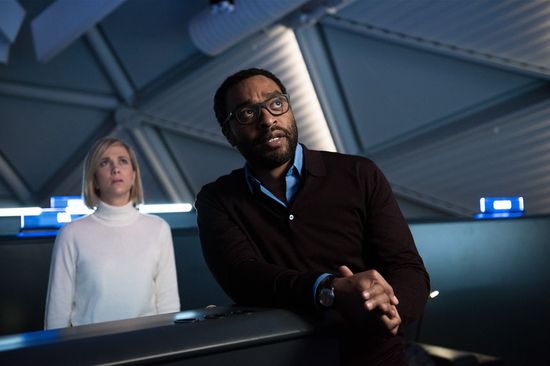 The film’s 3D effects are good but not great. Hitting theaters around the same time as Robert Zemeckis’s 3D eye-popper “The Walk” does not deliver a favorable comparison.

When you think of Ridley Scott, you think of “Alien” and “Blade Runner,” two bar-setting sci-fi classics. Sadly, “The Martian” shares little of those superior films’ complexity or dark undertow. “The Martian” is a popcorn movie that should have been pastrami sandwich on burnt rye toast. 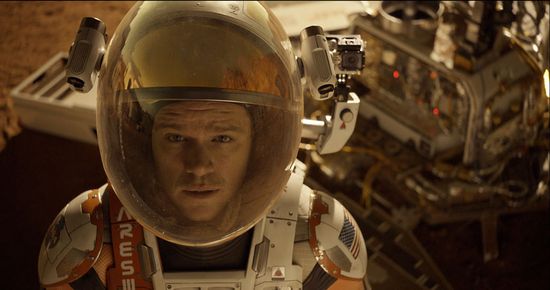