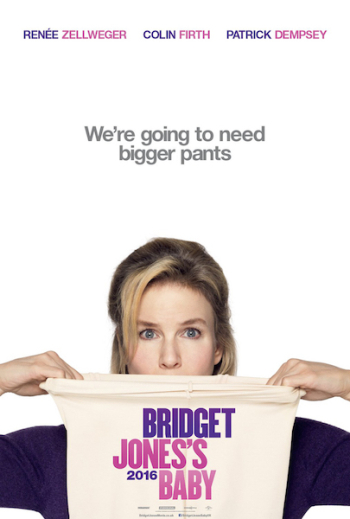 You know you’re in trouble when momentary flashbacks from previous films in a franchise make you wish you were watching one of them instead of the dreary cinematic rendering before your eyes.

It’s debatable which one’s holding up better — Colin Firth or his nine-years junior co-star Renee Zellweger, but watching Patrick Dempsey break character as a passive-aggressive third wheel is enough to turn your stomach. If you didn’t figure it out; Bridget won’t know which one is the dad until the baby is born and a DNA test can be done. Oh the problems of the upper class.

Bridget is none too saddened by the recent death of her former boytoy Daniel Cleaver (Hugh Grant), whose plane “went down in the bush.” She might be lonely, but Bridget’s female co-workers are busy with gangbangs and threesomes at handy dandy London sex clubs. Never mind, this movie doesn’t dare go there. Committee screenwriters Helen Fielding, Dan Mazer, and Emma Thompson would rather take their target audience of white-ladies-who-lunch on a foray into an imaginary music festival land of weekend glamping in yurts. Naturally, Bridget wears an all white outfit with six-inch spike heels. If you are male, and have made it this far in this review, you’re work here is done. 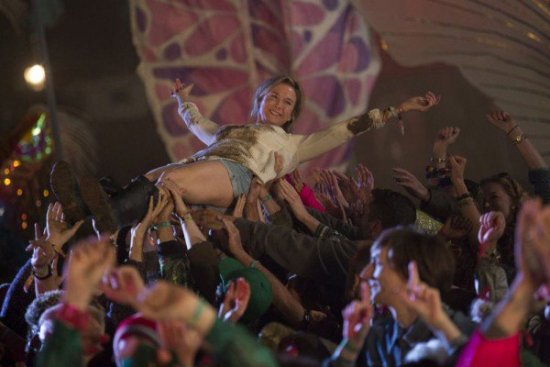 If, on the other hand you are a non-white female you will have your work cut out for you to not run for the restroom to vomit at the disgusting patronizing yet condescending tack this film takes in making romance seem like a dump you take after being constipated for five days.

Director Sharon Maguire (helmer on the franchise debut “Bridget Jones’s Diary”) — at least they got the punctuation right — spares no excuse to crank up the most obvious and outdated musical cues in the history of modern-day Hollywood. Sitting on the couch alone: cue “All By Myself.” Having a pity party for one: play “Jump Around.” What would a party scene be without “Gangnam Style”? And the musical atrocities go on, and on, and on, and on, and on. Don’t believe me? Well, there’s “Fuck You” (by Lily Allen) during a fit of pique. And what cheesy rom-com would be complete without “I Heard It Through the Grapevine” paired with “Up Where We Belong.” Talk about on-the-nose telegraphing, it’s like a nervous tic.

And, why a baby? With a movie as stillborn as this one, there’s no point in trying to pretend humor. There is not one joke, pratfall, or line of dialogue that will induce even a brief smile. If you’re 60, white, and female, you’ll chuckle for no good reason, but you already do that anyway. I’m sure the screenwriters laughed plenty at their own not-funny jokes. For the rest of us, there is no boredom less compelling than sitting through this irredeemable piece of cinematic trash.