Who is Kong this time? That’s the burning question any movie audience should be asking themselves when going into this woefully disappointing military adventure flick.

In 2017, you might suppose that the biggest monkey on the planet would be anatomically correct; however, that is not the case. We are left to conclude that Kong might represent a transgendered ape co-opted by a foreign and domestic patriarchy to fit their narrative agenda. One thing is for certain; our gigantic ape protagonist isn’t sporting a package. The by-committee (and focus grouped) script loses ground early on by not identifying the human protagonist that we should put our faith in for this two-hour endurance test.

At first blush it seems that John Goodman’s super-invested scientist Bill Randa is the man for the job, but the screenwriters quickly shuffle Bill off to the side in favor of Tom Hiddleston’s oh-so-metrosexual James Conrad, a British ex-military mercenary tracker who probably counts calories. Conrad comes across as the kind of guy who wouldn’t know what to do with a boner if he ever got one. 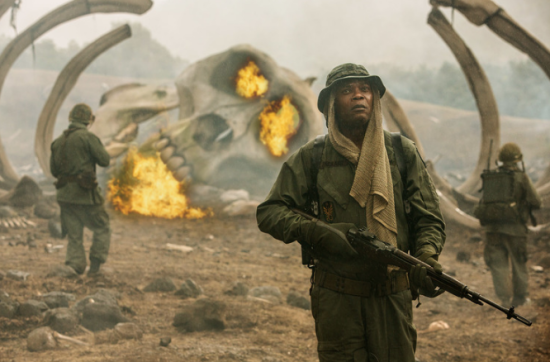 Equally absent of a libidinous center is Brie Larson’s “antiwar photographer” Mason Weaver. Even Kong can’t manage to muster any romantic interest in Mason when he holds her tiny body in his giant maw. Forget about Fey Wray or Jessica Lange (two O.G. actresses whose characters Kong took amorous interest in); the days of cross-species attraction are over. You can’t have a King Kong movie without a love story.

The storyline goes half in the bag as a “Heart of Darkness” knock-off that might whet your appetite to check out Coppola’s “Apocalypse Now Redux” just to remind you what a great film is like. There are so many rock music montages in “Kong: Skull Island” that they feel like commercial breaks in the action. It’s fine to give Iggy and the Stooges props by playing “Down On The Street,” but it reeks of filmmakers trying way too hard to be hip. 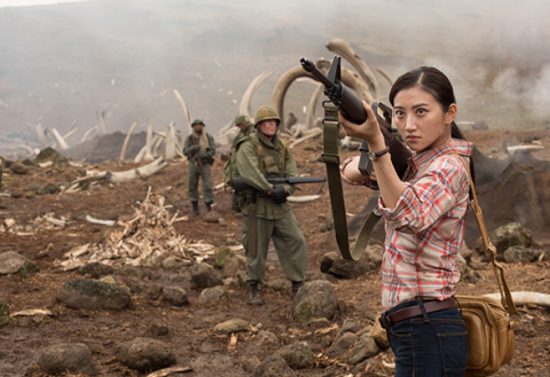 This movie devolves into a slasher picture where you keep guessing about who will be knocked off next. We already know most of the U.S. soldiers sent along on the (circa 1973) mission are doomed. The filmmakers could have at least pulled out some real surprises in this area of character deletions. Instead, every plot point seems so rote you could script the story as you’re watching it. Sure, there’s some cool spectacle to be had, as when Kong battles a giant lizard creature, but there’s isn’t any meaningful social commentary for subtext.

“Kong: Skull Island” is a neutered adventure movie without any soul, or balls.

Posted by Cole Smithey at 01:57:40 PM in Action/Adventure