A poetic character study etched in its primrose Portland, Seattle locations, “Police Beat” is a clear-eyed dissection of the immigrant experience in pre-smartphone America.

Senegalese non-actor (and former Junior World Cup Soccer Team star) Pape Side Niang plays Z, a newly hired bicycle cop attempting to create a romantic life with an American white girl more interested in playing head-games than spending time with him. Barely into his 20s Z is a Muslim struggling with Western culture from the ground up. His motivations are unfettered. He saw an ad in the newspaper, passed the test, and became a police officer. 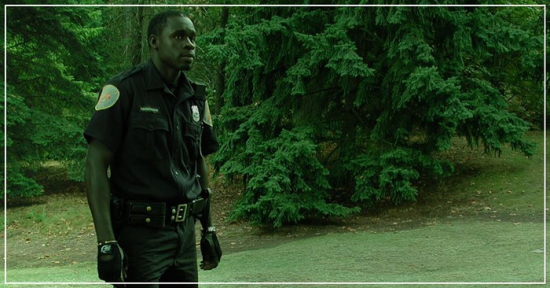 THE IRISHMAN — THE CRITERION COLLECTION 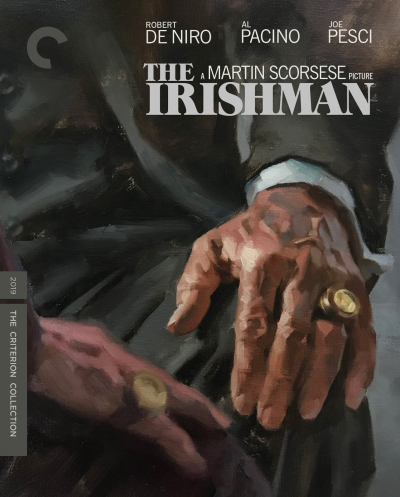 It will likely take a few years before audiences begin to appreciate “The Irishman” for what it is, a tremendous filmic social and character study of mafia influence that kept the wheels of industry turning in America for decades. Funny, gripping, and exquisitely crafted, “The Irishman” may well end up being considered Martin Scorsese’s greatest achievement. Cheers to that! This picture is a masterpiece, but you probably won’t think so when you watch it. Come back in five years and watch it again, you'll think differently. 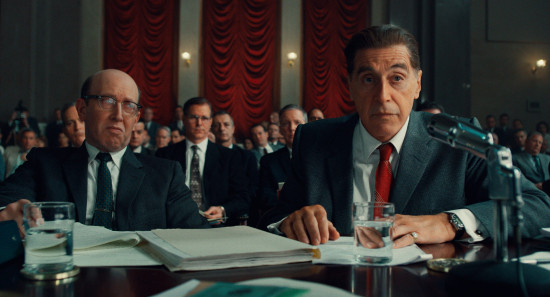 Clocking in at nearly three and a half hours, “The Irishman” is to Martin Scorsese what “Sandinista” was to The Clash, a generous gift of art meant to entertain, inspire, and inform. More is more. Watching Al Pacino, Robert De Niro, and Joe Pesci ply their acting craft mastery under Scorsese’s insightful eye is an incomparable cinematic pleasure. What sublime joy. If Joe Pesci’s performance slips in more fun than you can have with your clothes on, that’s just garlic in the marinara sauce. This movie cooks with gas, on four burners. 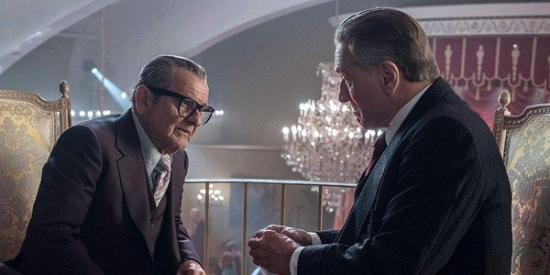 This is Cinema, characters talking and taking action with available people and tools that seal their fate. Drama muthafuka. When Scorsese foreshadows gangsters’ deaths with chyrons, it adds a documentary element that hooks you in like wearing your Sunday suit to church when you were 15.

We meet Harvey Keitel’s Angelo Bruno at a restaurant meeting. “Angelo Bruno — shot in the head sitting in his car outside his house, 1980.” At least he wore nice suits. Doom waits around every corner for characters whose perception of reality isn't all that it's cracked up to be. 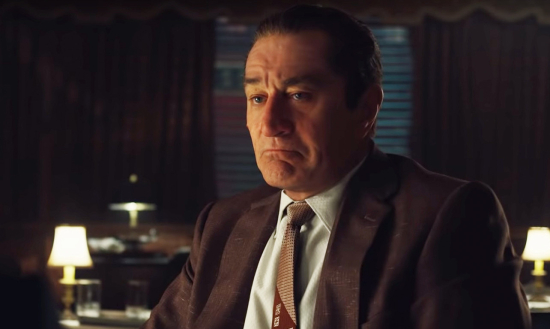 Scorsese’s “Gangs of New York” screenwriter Steve Zalian based his frequently hilarious script on Charles Brandt’s book of the same title. “The Irishman” is a neat bookend to “Gangs,” a film ruined by Harvey Weinstein’s influence, and by Cameron Diaz — but that’s another story.

Jimmy Hoffa may not remain the household name that it once was, but “The Irishman” puts a fine point on answering decades old burning questions about how Hoffa was killed, and how his body was disposed of. The film fulfills an essential public service. I'm not kidding. 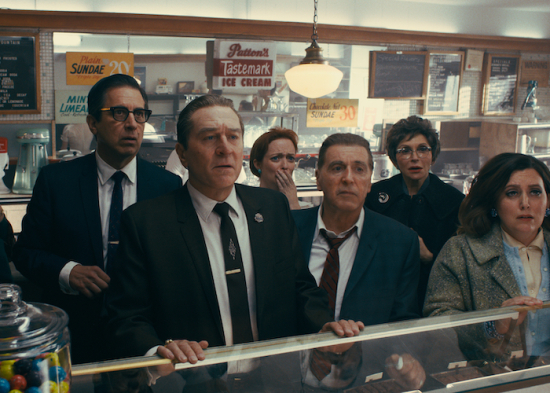 The unbalanced friendship that develops between Pacino’s Jimmy Hoffa and De Niro’s Frank Sheeran is the stuff of legend, real and imagined. You couldn’t call it a bromance, but the camaraderie on display is downright familial. To say that De Niro’s casting as an Irishman is a stretch might be an understatement, but the proof in his craft is flawless. 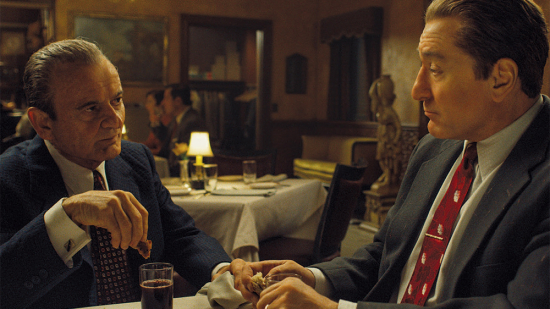 Wafts of Elaine May’s brilliant 1976 “Mickey and Nicky” breeze over “The Irishman” if only for the fraught connection between both films’ main characters. Linking Peter Falk to Robert De Niro, and John Cassavetes to Al Pacino is a joy you can discover if you’re enough of a movie lover to follow through. Indeed, “The Irishman” is long; thank you Martin Scorsese, cast, and crew for going over an beyond to create such a magnificent movie experience. Cheers!