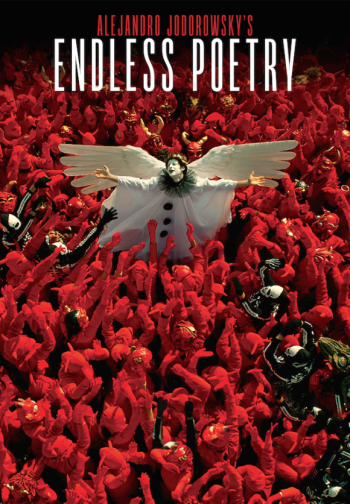 The second installment in Alejandro Jodorowsky’s promised five picture cycle of filmic memoirs harmonizes with the theatrically heightened tone and style of “The Dance of Reality” (2013). This succession of films marks Jodorowsky’s return to filmmaking after a 23 year hiatus after his 1990 film “The Rainbow Thief,” a film he disowned due to conflicts with the film's British producers.

“Endless Poetry” continues the narrative line of “The Dance of Reality.” A pubescent Alejandro (Jeremias Herskovits) is growing up with his parents in Santiago, Chile. While the mother Sara (Pamela Flores) operatically sings all her lines, Alejandro’s brutish father Jaime (Brontis Jodorowsky) accuses his poetry-obsessed son of being gay when he discovers him reading aloud from Federico García Lorca’s poem “For the Love of Green.” You'd be hard pressed to find a more lovely poem. The die is cast that Alejandro must escape the clutches of his parents if he is to follow his dream of becoming a poet. 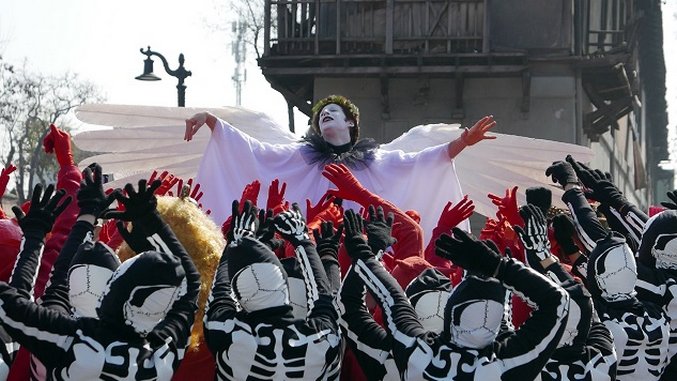 The casting seamlessly shifts to a twenty-something Alejandro (played by Jodorowsky’s younger son Adan) fearlessly taking a running start at his chosen profession of words by following his red-wigged muse Stella Diaz (also played by Pamela Flores in dual roles). Stella insists on holding Alejandro’s crotch whenever they go out in public, but not allowing “penetrative sex” because she is awaiting an unknown mystic to descend from a mountain to part with her dubious virginity. Rejection and suffering are to be celebrated. 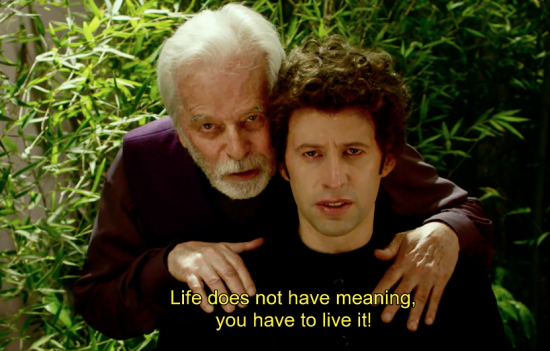 The episodic narrative tears a page from John Cheever’s “The Swimmer” when Alejandro and his latest poet friend go on an adventure walking across town in a straight line that takes them through people’s homes. The effect is an operatic trail of personal growth informed by visits from Jodorowsky himself where he advises his younger incarnations about the big picture of life. “I’ve sold my devil to the soul.”

"Life does not have meaning, you have to live it!”

Such is the pragmatic nature of Jodorowsky's nurturing, if poetically expressed, ideologies. Pedantic perhaps, but filled with undeniable passion.

Alejandro Jodorowsky is the most euphoric filmmaker of our time. His transgressive artistic sensibilities form a focal point of pure artistic intentionality that the viewer can either accept or reject, embrace or shed. Either decision will lead the viewer to a personal place of artistically directed balance. You don’t get that from watching the latest “Spider-Man” movie. 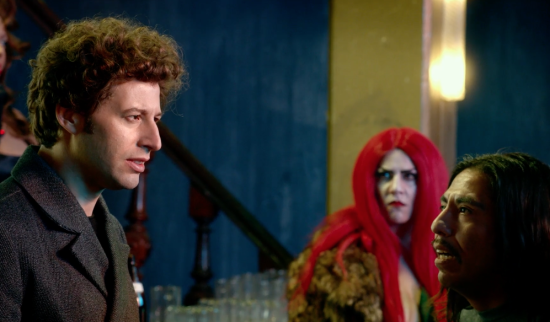 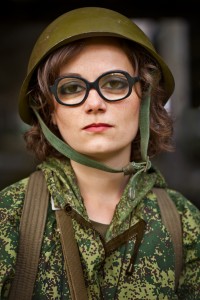 Trashmeister writer/director John Waters takes ironic comedy and social commentary to an all-time sleazy low in his new movie “Strap-On.” Waters deviates from his Baltimore roots to urban and rural areas of Afghanistan where Maya Stain (played by former SLA member Patty Hearst) fights for SOC (Socialism Over Capitalism), a left wing mercenary group caught in a cross-fire between Taliban fighters, the Mujahideen, American troops and desperate civilians. Hearst might be pushing 60, but she still knows how to handle a machine gun. You will never want to see another movie after seeing this one, and you won’t want to see this one again. 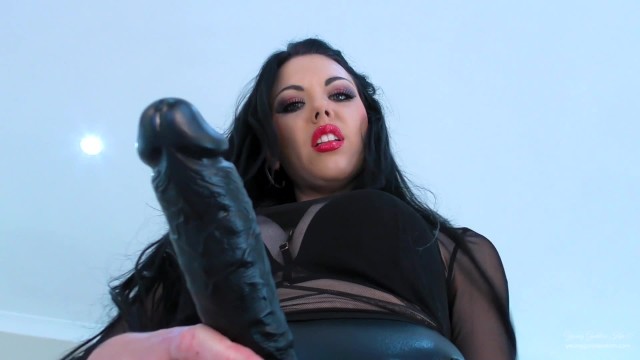 Waters views the mercenary lifestyle as fodder for social camp. He satirizes the Afghanistan military and social structure of the country while also poking fun at things like their public bathrooms, which consist of a well from which the user must hang on a rope with a piece of wood as a half-seat. There is a scene where the strap-on-wielding Stain throws a knife into the back of a Tajikistan military officer, sending him down into the dung-filled hole, giving Stain the opportunity to lean back and roar like a banshee in devilish delight. Her victim is indeed left "stained." 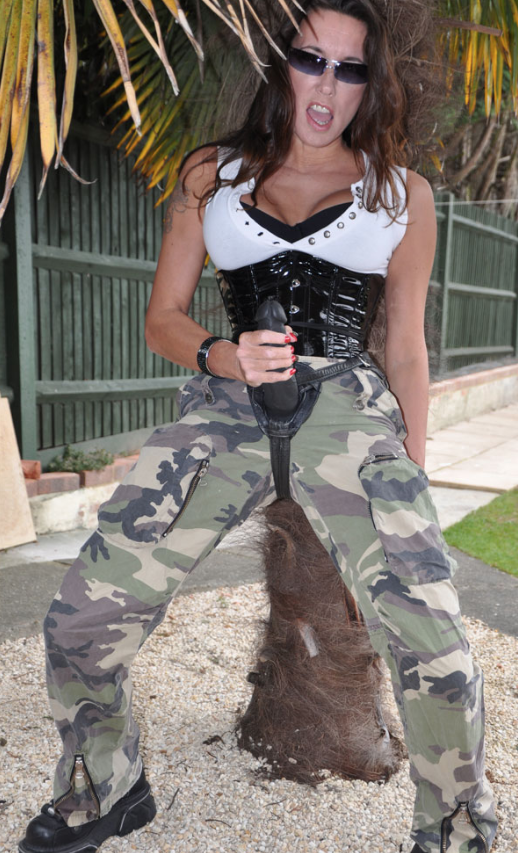 Tatyana (played by British comedienne Tracy Ulman) is an Uzbekistan national that Stain takes as a hostage during one of the SOC’s hostile take-overs of an American military facility. The movie really gets going when Tatyana, a cross between Deborah Harry and Hillary Clinton, becomes romantically-involved with Stain after the dust has settled. A wild pornographic lesbian love scene involves Tatyana singing “Raindrops Keep Falling On My Head” while Stain pounds her from behind like a steam locomotive. 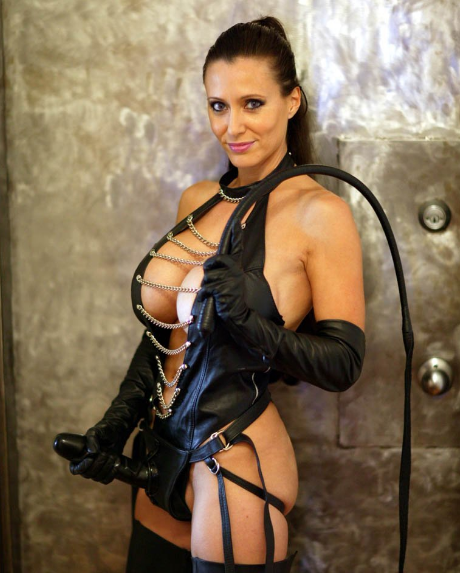 Waters’s “movie” satirizes death, sex, torture, weapons, military officials, the Taliban and the universal phallic obsession of all soldiers. “Strap-On” is yet another reminder that America has gone past the point of no return and dragged the rest of the world down with it. Just as America’s ethics have gone down the toilet, its films have followed suit. The stain cannot be contained. Cinema is dead. 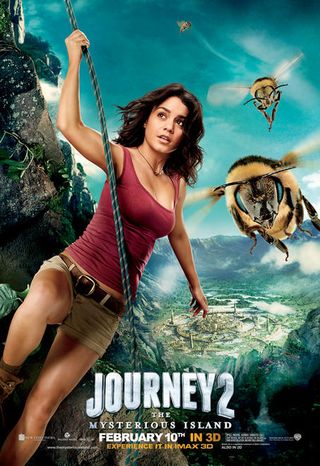 Though hampered by some uninspired efforts in the joke department from newbie cousin screenwriters Brian and Mark Gunn, "Journey 2: The Mysterious Island" is a passable PG-rated family adventure movie. Added to the film’s flat sense of humor is the misguided replacement of franchise-starter Brendan Fraser (“Journey to the Center of the Earth”--2008). Dwayne Johnson suffers the indignation of performing step-dad duties to Josh Hutcherson’s returning daredevil character Sean Anderson. The actor formerly known as The Rock nearly redeems himself during a stirring ukulele rendition of "What a Wonderful World." The musical interlude unexpectedly brings the scattershot adventure momentarily into focus with some assistance from an indispensable but ultimately squandered Michael Caine. 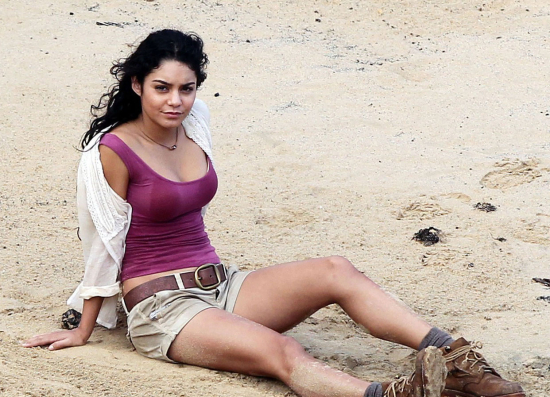 Childhood literary classics that include Jonathan Swift’s “Gulliver’s Travels” and Jules Verne’s “The Mysterious Island” inform the story in a sidelong fashion. In the burbs of Dayton, Ohio Sean receives a coded message from his long-lost grandfather Alexander (Caine). Sean’s stepdad Hank is an ex-Navy man with a knack for code breaking. The missive sends Sean off on a chaperoned adventure to reunite with gramps. A sputtering chartered helicopter, flown by Luis Guzman and his character’s comely daughter Kailani (Vanessa Hudgens), enables a suspense-free hurricane ride that spits our plucky explorers out on the shores of an island that could just be the lost city of Atlantis.

Dwayne Johnson is an actor who tries so hard to be likable that it hurts. Given his obsequious nature, it’s easy to understand why the filmmakers chose him to replace Brendan Fraser, whose famously nerdy need to please comes across as a central aspect to his Canadian heritage. But where Fraser has a frenetic internal rhythm of free-spinning animation about his physicality, Johnson is plodding and methodical to a fault. His muscle-bound comportment overpowers the relative diminutive actors around him. There’s no jiving chemistry between Johnson’s fatherly Hank and Josh Hutcherson’s Sean. Caught between playing up a subplot of budding romance with Kailani, and following Michael Caine’s lead as the kind of person Sean aspires to be, Hutcherson gets hung out to dry in every scene he shares with Hank. 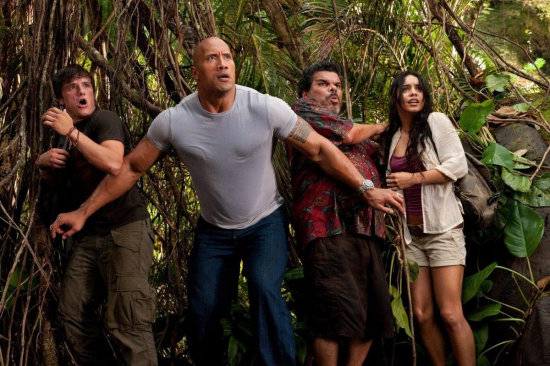 An example of the film’s lukewarm wit occurs when Hank gives Sean a demonstration of something he calls the “pec-pop.” Johnson flexes his pectoral muscles so they tense back and forth in a flip-flopping fashion. This odd display of masculine muscle manipulation is intended to impress members of the opposite sex. Needless to say Sean doesn’t possess such physical attributes to execute the maneuver in the first place. Hank demands that Sean throw berries at his bouncing pecs for the apparently singular reason of supplying the audience with an overworked sample of eye-blinking 3D effects. The ridiculous sequence begs the question, “What were the filmmakers thinking? The whole thing is just to weird to be funny. 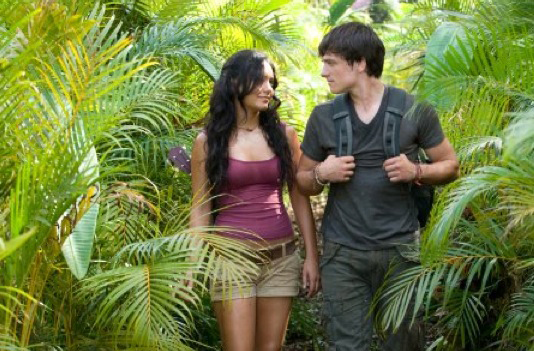 Director Brad Peyton (“Cats & Dogs: The Revenge of Kitty Galore”) struggles to make the most of superficially impressive creatures that populate the mysterious island that grandpa Alexander calls home. Miniature elephants, gargantuan bees, and slithering giant centipedes supply innocuous eye-candy that never reaches beyond its CGI limitations to anything substantial. A giant electric eel boots the possibilities for spectacle during the story’s underwater climax. A few window-breaking 3D effects spice up the amusement in a visually entertaining but narratively trivial movie. It might not be the bee’s knees for adult audiences, but “Journey 2: The Mysterious Island” meets the unsophisticated demands of its pre-teen target audience.