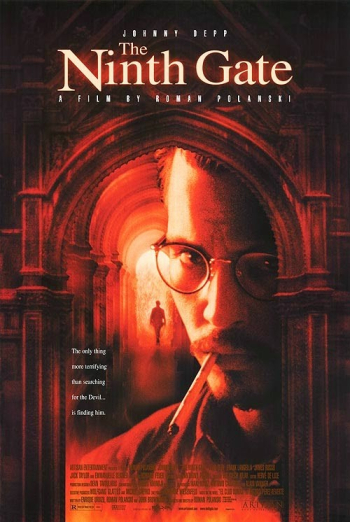 The Ninth Gate is a well-crafted and entertaining horror film. While director Roman Polanski chooses to lilt over the horrific trajectory that tugs mercenary book dealer Dean Corso (Johnny Depp) toward the gates of Hell, rather than embrace his protagonist's terror as he did with such shockers as Rosemary's Baby (1968) or The Tenant (1976), Polanski stakes out his own ground rules and adheres to them flawlessly.

The sense of suspense is formal as it is purposeful. 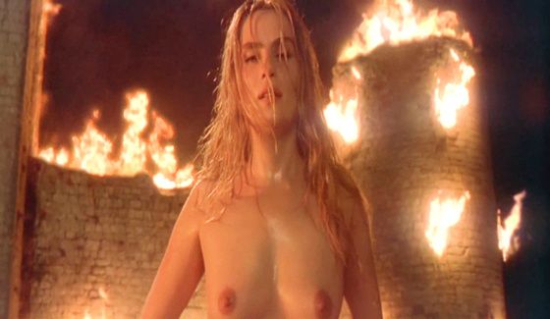 Polanski and his two collaborating screenwriters, John Brownjohn ("Tess") and Enrique Urbizu, orchestrate their Faustian script in a cinematic shorthand that magnifies tiny details like subtle differences in the nine diabolical engravings which comprise the murderous puzzle that Corso attempts to unravel amidst the three volumes. Polanski drops in sudden repulsive images that give terse nods to such horror films as Hitchcock's Frenzy, and Nicholas Roeg's Don't Look Now. He allows scenes to play without the ersatz aid of musical accompaniment, resulting in a delightfully intimate game of call and response for the audience to conceive while the action unfolds. There are so many highly polished cinematic elements to enjoy in every frame of the movie that repeated viewing beckons. 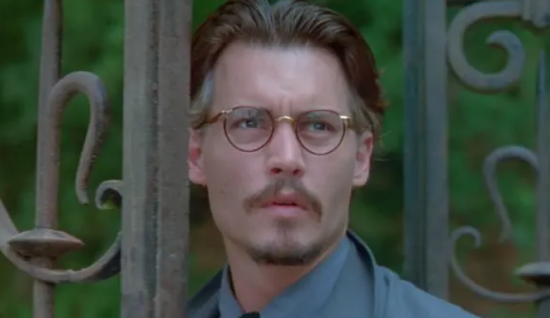 Pauline Kael said that "great movies are rarely perfect movies," and this truism certainly applies to The Ninth Gate. Actress Emmanuelle Seigner's (Frantic) sub-plot as Dean Corso's mysterious, dark guardian angel slips through the film as a sexy and enigmatic mascot that Corso accepts too easily. There are plenty of silly bumps and loopy twists that don't sufficiently fulfill a dynamic dramatic arc for the film's slightly long running time, but no jolting scares. Still, there is plenty to enjoy in director of photography, Darius Khondji's ("Seven") hand-in-glove association with the masterful vision of a director who believes that content is more important than form. 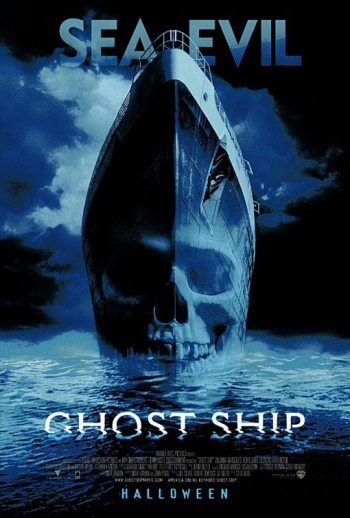 While Ghost Ship may not provide much more than a series of cursory scary moments over its 88-minute length, the movie's over-the-top opening sequence is worth the price of admission alone.

Bright pink lettering introduces the film as if it were a campy romantic comedy. Gentle lounge music plays from a '50s-style nightclub aboard a glamorous Italian ocean liner. Well-dressed travelers dance to the ship's band and elegant chanteuse, oblivious to the impending danger about to snap at their twitching bodies. 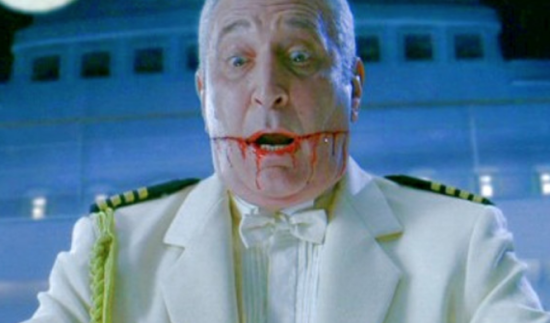 The following moment of gruesome surprise is drawn out with such gleeful prolonging that the scene goes from shock to horror to comedy and back to shock and horror without missing a beat. Audiences wanting that old-fashioned "Boo!" surprise of a Halloween spook-house experience can get a few good thrills in the safety of a darkened movie house with Ghost Ship, at least in this opening scene. 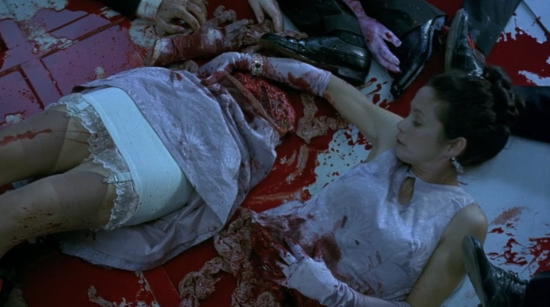 A tugboat salvage crew gets an unexpected opportunity when Jack Ferriman (Desmond Harrington of Boiler Room), a Canadian air force pilot, shows them black-and-white aerial photos of an abandoned ship floating off the coast of Alaska in the Bering Sea. Led by Captain Sean Murphy (well played by the ever reliable Gabriel Byrne), the crew of the Arctic Warrior tugboat agrees to allow the pilot to join them in their salvage effort to claim whatever riches the ship still holds and give the messenger a 10 percent finder's fee for his trouble. 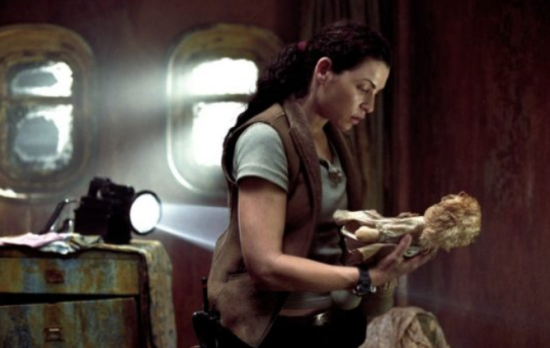 Once on board the giant floating rust-bucket cruise liner known as the Antonia Graza, the crew encounters a few ghosts, some truly scary food supplies, and a huge shipment of solid gold bars valued in the hundreds of millions of dollars. The crew team leader Maureen Epps (Julianna Margulies) communicates exclusively with the ghost of an attractive young girl named Katie (Emily Browning), who survived a little longer than the rest of unfortunate people on the dance floor when death paid a visit to the ship in 1962. 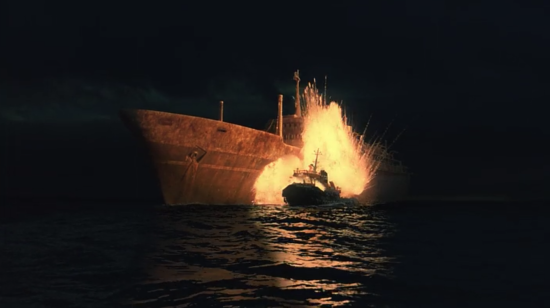 Blood oozes from bullet holes inside the ship's old swimming pool as the crew struggle to repair a gaping hole in the ship's hull. But the cold claustrophobic fear that should creep off the screen like a dense San Francisco fog never catches on because director Steven Beck (Thirteen Ghosts) can't match the timbre of the movie to the tone of the ship's foreboding atmosphere. Beck never instills the proper mood of dislocation into his actors, nor does he use the camera as a conspirator in building the audience's sense of anxiety. 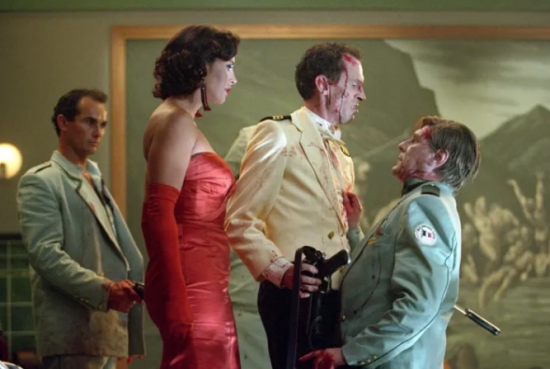 Tugboat crew members meet with sudden deaths that occur off-screen half of the time, leaving the audience to wonder why we weren't included. The ship's ghosts turn out to be not as vengeful as your typical ghosts. Still, a  gruesome flesh-ripping sequence make sure that our attention is held while the true face of evil presents itself.

Ghost Ship won't rock anyone's world, but it's still an improvement on another recent horror flick, The Ring, from which audiences walk out scratching their heads as to what they saw and why they spent their hard-earned money to see such a morass of cinematic boredom. 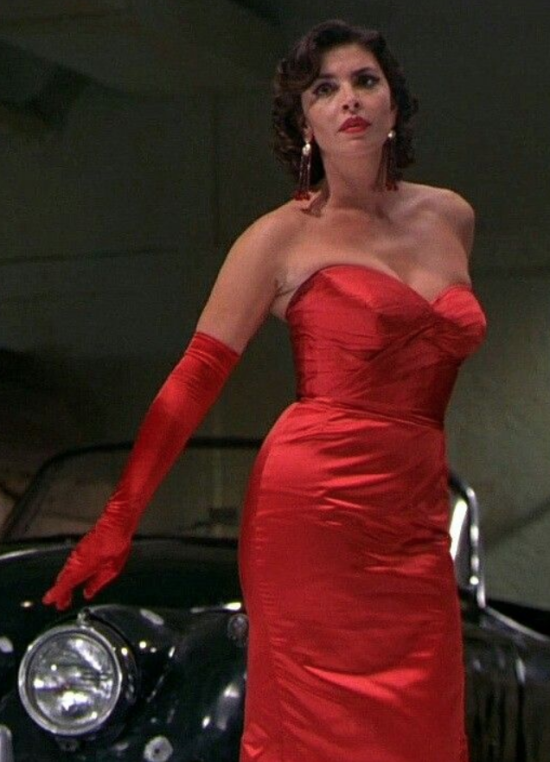 This review originally ran in the Colorado Springs Independent in 2002. 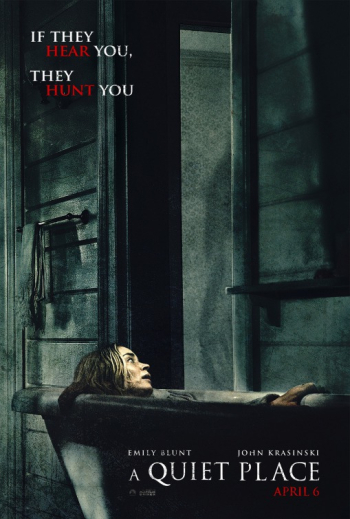 Don’t believe the hype. “A Quiet Place” is a plot-hole filled waste of time. Scary? Not even close. All respect for John Krasinski (making his directorial debut) and his real-life wife Emily Blunt aside, the performances in this film leave much to be desired.

As Graham Parker sings, “Children and dogs will always win, everyone knows that. I won’t work with either one again.” Wise words. Deaf child actor Milicent Simmonds (“Wonderstruck”) seemingly couldn’t act wet in a rain storm. This film’s flaws however reach much further than shoddy portrayals. 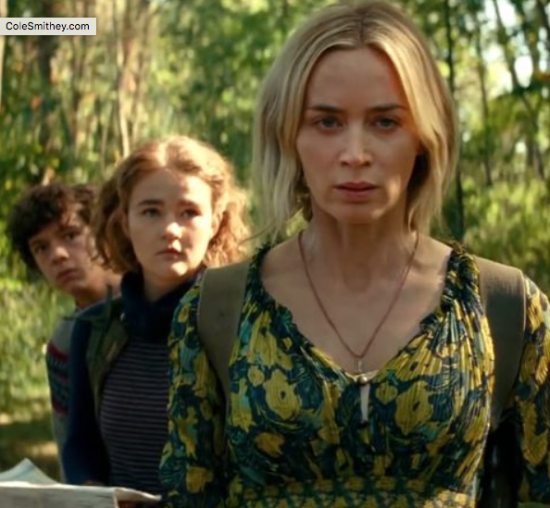 A by-committee minimalist script from three writers (Bryan Woods, Scott Beck, and John Krasinski) drops the audience into day 89 of an alien invasion. The premise is simple, alien monsters with acute hearing, and poor vision, track humans by sound. Sneeze loudly and you’re toast. Needless to say there is very little dialogue in the film. This is not a good time or place for characters to be having babies considering the inevitable cries that will cost you and your would-be infant its life. More on that later. 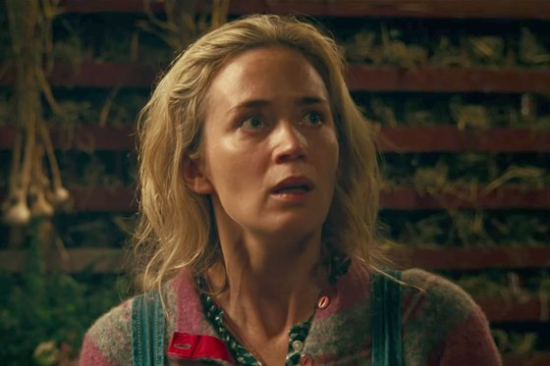 Our four-person family unit consists of Blunt and Krasinski playing parents Evelyn and Lee Abbott to adolescents Beau (Cade Woodward), Regan (Simmonds), and Noah (Marcus Abbott). These parents aren’t winning any awards for their responsible parenting skills. The number of children drops to two early on in the action before the remaining kids go missing. Where most parents would be worried sick, Evelyn and Lee are cool to a fault. "The kids will be fine." If the parents don’t care, why should we. Not only that, Evelyn has a fully-baked bun in the oven who, when he’s born, is the quietest baby you’ve ever seen or not heard. 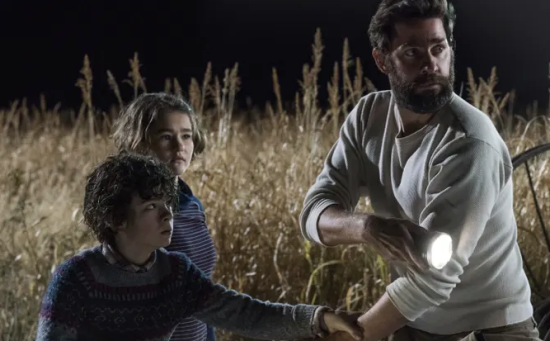 The tail-chasing narrative comes down to a couple of irresponsible parents searching, or not, for their two missing young kids while bringing another one into an inhospitable world where it will most certainly be eaten within a matter of days if not hours. I suppose you could read the text (and subtext) as a poorly formulated parable about overpopulation in a capitalist society that hears everything you do, but that would be giving this boring film far too much credit. 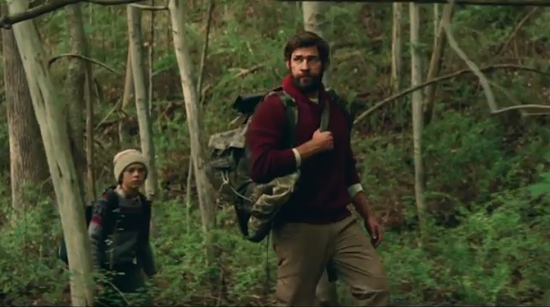 So while the groupthink virus continues to consume so-called critics, “A Quiet Place” is on par with M. Night Shyamalan’s (a.k.a. M. Night Shyamalamadingdong — I couldn't resist) insultingly mediocre post “Sixth Sense” overwrought, underdeveloped, and meepy films. Your disappointment awaits.