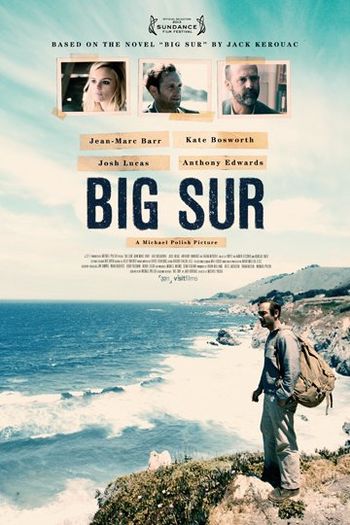 Adapting Jack Kerouac’s late career novel “Big Sur” (1962) proves an awkward challenge for director-screenwriter Michael Polish. That isn’t to say that the film is a complete failure, but it is disappointing. Nonetheless, it will be essential viewing for fans of Jack Kerouac, however fewer in number that group may be in 2013 when the once-pervasive influence of the Beat Generation seems far, far away.
Arriving on the heels of the long-belated screen version of Kerouac’s “On the Road” (directed by Walter Salles), which was released earlier this year, “Big Sur” pales by comparison. From a visual perspective, cinematographer M. David Mullen washes out the color of Big Sur’s autumnal beauty in favor of a nostalgic look that becomes an imagistic drone.

The filmmaker most renowned for his promising debut feature “Twin Falls Idaho” (1999) takes an all-too-literal narrative approach that favors voiceover where a more imaginative use of filmic storytelling would have been better suited to submersing audiences in Kerouac’s alcohol-fuelled stream-of-consciousness search for reinventing or destroying his identity as a writer — depending on his ever-darkening mood.

Kerouac’s self-examining book is, after all, a brief memoir about a literary icon burning out at time when college students around the world still pictured his long-defunct roustabout persona hitching rides across an America that no longer existed — à la “On the Road” — which Kerouac completed in 1951 [although the book wasn’t published until 1957]. By the August of 1960, fame has taken its toll on an author who was never cut out for such hot and cold treatment from society at large.

Jean-Marc Barr (“The Big Blue”) embodies Jack Kerouac’s alter ego Jack Duloz with a graceful authority necessary to the role. The movie finds Jack living and breathing an internal monologue of anxious depression. His loyal friend and poet Lawrence Ferlinghetti (Anthony Edwards) offers to let Jack stay at his remote cabin tucked beneath Big Sur’s Bixby Bridge in the hopes that Jack will get sober and return to writing. However, the appeal of such scenic isolation wears thin. Jack yearns for the noisy bars and familiar camaraderie of San Francisco’s North Beach. He returns to San Francisco.

Jack’s once limitless friendship with his best friend Neal Cassidy (memorably played by Josh Lucas) takes a dark turn after Neal introduces Jack to his mistress Billie (Kate Bosworth), who responds more amorously toward Jack than the free-loving Neal can comfortably swallow — even if he enabled the easy coupling. Jealousies ignite. Jack brings a group of his friends back to Big Sur for a communal vacation that opens up divisions in friendships that the author over-simplified in his imagination. Something is bound to break.

Audiences unfamiliar with the progenitor of the Beat Generation will be left to ponder what the big deal was all about if discovering Jack Kerouac for the first time via Polish’s version of “Big Sur.” Kerouac himself realized the dated nature of his individual literary voice, which by 1960, had been co-opted by so many copycat wannabes that he struggled for the resonance of original ideas that had once flowed so easily. 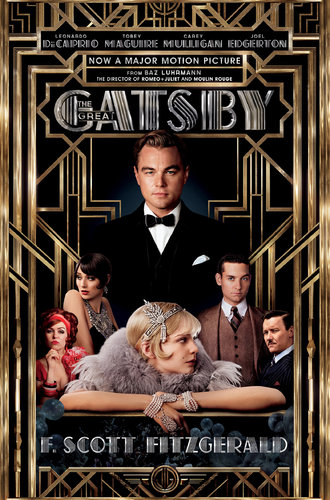 Baz Luhrmann’s bastardization of F. Scott Fitzgerald’s novel is a demeaning travesty. This film represents a sin against cinema and literature of cataclysmic proportions. Toxic rather than intoxicating, the movie breaks a fundamental rule of modern dramatic delivery by using a presentational [rather than representational] style that sends its audience into an exasperating spiral. The movie never so much as dips its slimy toe into the more sophisticated representational mode of storytelling that audiences should and do expect from a drama, no matter how fetishized it might be. All flash and artifice, there isn’t a cubic centimeter of narrative space for this story to breathe, much less resonate. Nuance and subtext are slapped away in favor of a vulgar approach to exposition. Characters don’t express themselves; they defile all they touch or desire.

This isn’t about Baz Luhrmann not staying true to F. Scott Fitzgerald’s seminal work of American literature — no one in their right mind would expect much editorial restraint from the notorious Baz Luhrmann, a director known for his ostentatious use of costume, spectacle, and a kitchen-sink ear for music. This is about a filmmaker so blind to narrative integrity that his taste level sinks before your eyes. There isn’t a mistake of dialogue, composition, musical scoring, direction, lighting, costume, or plotting that Luhrmann fails to make. Baz Luhrmann’s “Great Gatsby” provides a textbook laundry list of everything to avoid when adapting a novel — any novel. 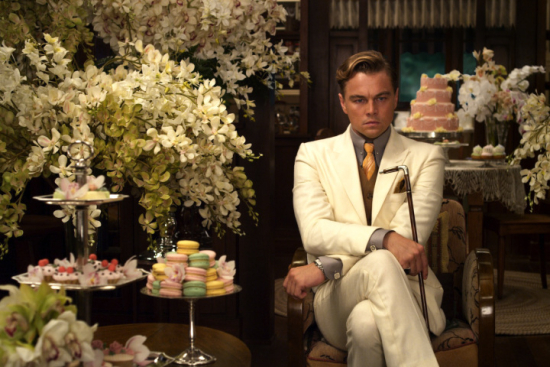 In his defense, Luhrmann tried to make his picture so different from Jack Clayton’s far superior 1974 version that he apparently tied himself in knots attempting to subvert it. The result is an ugly and obtuse mess — so many pretty colors, yet none with a strand of dramatic truth.

Luhrmann’s script — co-written with his usual collaborator Craig Pierce — turns character traits into intolerable distractions. Gatsby’s affectation of calling men “old sport” turns into a drinking game made worse by DiCaprio’s bizarre enunciation, which turns the phrase into “old spore.” As humorous as it might sound to hear Gatsby repetitively refer to acquaintances as some form of ancient bacterium, the joke misfires disastrously.

The usually reliable Leonardo DiCaprio gives an unwatchable performance thanks to Luhrmann’s misdirection, which turns every other character in the story into a faceless disposable bauble. Even if rising-star Garrett Hedlund (“On the Road”) had been better cast in the role of Gatsby, and Michelle Williams more suitably as Daisy, the talented actors would doubtlessly still have been just as hamstrung to deliver effective portrayals under Luhrmann’s ill-suited direction. 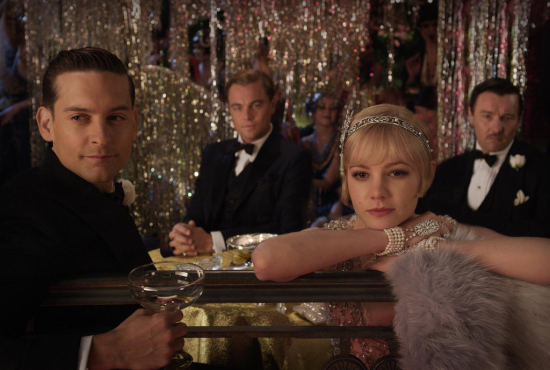 Anyone who has read Fitzgerald's book or watched Jack Clayton’s film version (starring Robert Redford) will be staggered by Luhrmann’s knee-jerk tendency to alter the story in ways that diminish key elements. Luhrmann gives away the farm relating to Gatsby’s mysterious past. The joys of discovering and guessing Gatsby’s carefully guarded secrets are squandered in manufactured flashback sequences not in the book. Moreover, DiCaprio’s Jay Gatsby lets all of his insecurities and lies show at precisely the moment when Fitzgerald’s character would tighten up. The character is presented here more as an unskilled con man than as someone who devised and executed a calculated if flawed way to obtain the woman he loves. Luhrmann's faulty instincts fumble every significant plot element he touches. A violently intimate scene in the book — in which a key male character publicly breaks his mistress' nose — is transmogrified into a slap shown in a throwaway long shot. No aftermath of the troubling event follows, as it does in the book.

One emblematic faux pas that Luhrmann makes is the way he furnishes Gatsby’s mansion. Every nook and cranny is covered in museum-quality pieces of art or antiques. In Clayton’s film version Gatsby leaves the public spaces of his mansion in a blank state, ostensibly to allow for Daisy’s womanly touch when he is able to make his romantic dream of possessing her a reality. The comparison shows exactly how leaving certain narrative aspects open allows an audience to engage with, and interpret the story at hand.

Perhaps Luhrmann’s greatest crime against “The Great Gatsby” is that he has suffocated Gatsby’s romantic quest. Baz Luhrmann has not told a story; he has smashed it to smithereens. 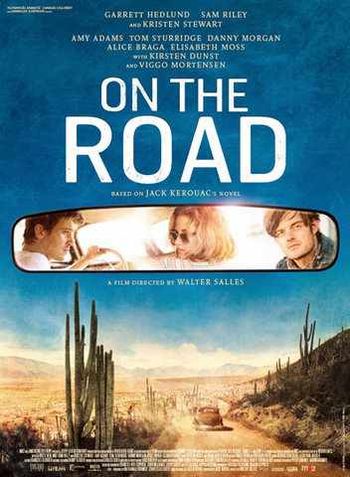 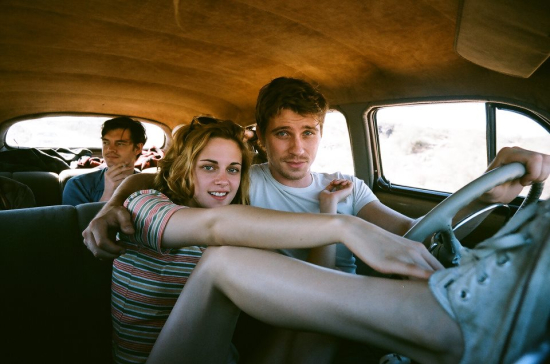 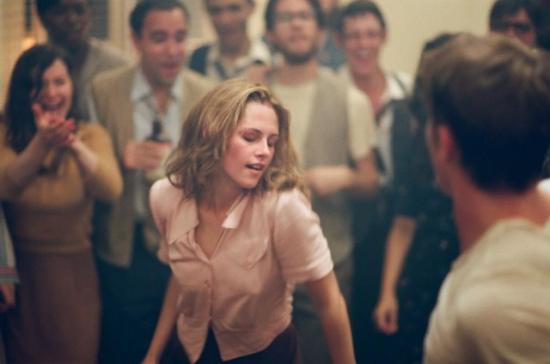 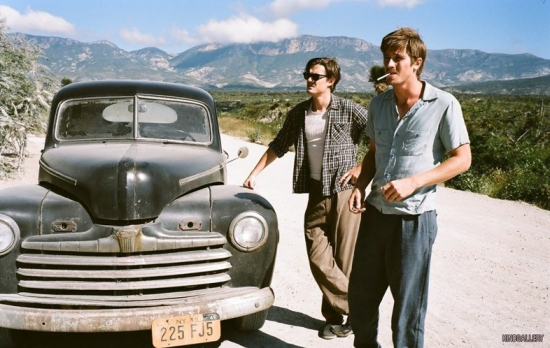