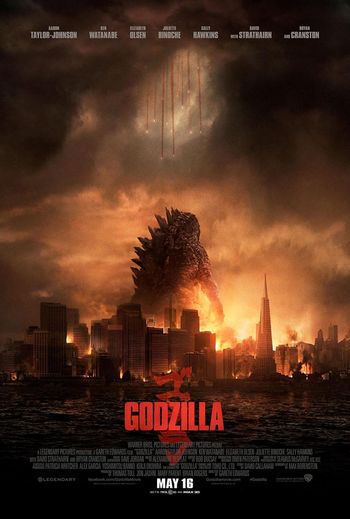 Further evidence that no one in Hollywood knows how to tell a story anymore, “Godzilla” starts out promisingly enough before slipping into a snooze-fest by the end of its first act. A cool post-World War II-era credit sequence depicts a U.S. military attempt to rid the world of a barely-viewed Godzilla. An atomic bomb falls directly on the creature, whose prehistoric spikes protrude from the Pacific Ocean’s surface like a small jagged island, stuck somewhere near the Philippines. A gaggle of Americans watches the violent event through binoculars from an island beach that isn’t as safe a distance away from the explosion as they imagine. Bye bye, suckers.

Cut to late ‘90s Japan, where nuclear plant engineering expert Joe Brody (Brian Cranston of "Breaking Bad") and his equally qualified wife Sandra (Juliette Binoche) both work. Cranston and Binoche deliver such energized performances that you hang on their every word and action. Cranston doesn’t just chew scenery; he owns the movie. These are the kind of hyper-articulate and intelligent characters you want to see grapple with a juiced-up prehistoric monster the size of the Statue of Liberty.

Sadly, Cranston’s and Binoche’s presences are a short-lived ruse. As soon as we take the bait — believing that screenwriter Max Borenstein and director Gareth Edwards know what they’re doing — the filmmakers torpedo the pair and restart the narrative with far less intriguing figures — namely that generic kid from the “Kick-Ass” movies (Aaron Taylor-Johnson) and Elizabeth Olsen, in super-sincerity mode as his long-distance wife. Taylor-Johnson plays Ford Brody, a rah-rah Navy soldier son to Cranston’s fading character. Ford is a bomb disposal specialist.

Swapping out Cranston and Binoche with Taylor-Johnson and Elizabeth Olsen is a cheat akin to substituting saltines for filet mignon. Taking into account the time squandered with the film’s false start, and the long delayed introduction of Godzilla — the giant lizard doesn’t show up until the film’s final half-hour — you end up with less than half of an already disappointing movie (unless you’re looking for an excuse to take a long nap).

From the look of it, you’d think the filmmakers never saw the original Japanese version from 1954. That film’s huge multi-national success owed considerably to its camp sensibilities. The original Godzilla focused much of its attention on the reactions by terrified Japanese citizens to inform the audience as to how to enjoy the movie. Fallout from the relatively recent nuclear bombings of Hiroshima and Nagasaki informed a dark reality-based atmosphere that the film’s humor punctured with joyous results. It didn’t hurt that a guy in a monster suit played Godzilla. After two abominable American versions of Godzilla, it’s reasonable to determine that American filmmakers aren’t capable of making a respectable adaptation, perhaps because they never had a dog in the race.

This time around, Japanese nuclear reactors explode — reference Fukushima — bringing to life a couple of giant insect-like creatures termed “MUTOs” (“Massive Unidentified Terrestrial Organisms”). The box-headed MUTOs are in full display for much of the movie, but have all the personality traits of a can of pinto beans. There are plenty of scenes of American military soldiers running around doing stuff, but Godzilla goes oddly missing. Squandered performances come from David Strathairn (in a storyline placeholder role as Navy Admiral William Stenz), and Ken Watanabe (as Dr. Ichiro Serizawa, an authority on MUTOs whose advice to let the monsters fight instigates the film’s yawn-inducing climax).

One of “Godzilla’s” most grievous errors lies in its underwhelming use of 3D technology. Never does Godzilla’s reptilian fist reach out in front of the viewer’s face. His massive reptilian tail never swings out into the audience. The blue-fire Godzilla breathes never breaks the proscenium window. The audience is left to wonder why the filmmakers even bothered with 3D at all if they weren’t going to exploit the technology for its obvious, well-established potential to bring the monster off of the big screen and into our laps.

2014 is shaping up as a pathetic year for Hollywood. Indie films and documentaries rule the day. Hollywood is broken because it believes in spectacle over story. In order for Hollywood to learn its lesson, the public needs to spend their movie dollars on better, smaller films such as Amma Asante’s “Belle” or Alejandro Jodorowsky’s “The Dance of Reality.” Comic-book movies won’t cut it, and neither will uninspired adaptations of Japanese films from a half-century ago.