Of the handful of directors ready, willing, and able to make a Western that’s worth a damn, Tommy Lee Jones runs neck and neck with Clint Eastwood. Anyone who has seen Jones’s impressive 2005 neo-Western “The Three Burials of Melquiades Estrada” has some idea of what not to expect from Jones’s no-frills approach to the genre. Forget about stereotyped characters, epic vistas, or action-filled gunfights. Hardscrabble people living in difficult conditions with rough-hewn tools of the physical and intellectual varieties are what Tommy Lee Jones is interested in. Any displays of humor will be as droll as the desert is dry. The allegories and subtexts that Jones explores here appear as ancient cultural artifacts that require the viewer to delve deeper into the narrative substance and form being presented. Nothing is spoon-fed.

“The Homesman” is the seventh of Glendon Swarthout’s novels to be made into a film. His most popular adapted Western, up to now, was John Wayne’s last, remarkable film “The Shootist” (1976).

The “Homesman’s” title is confusing. At first blush, you might presume it reads, “The Horseman.” So while the film’s poster features Hillary Swank’s character (Mary Bee “Cuddy”) in the foreground, it is Jones’s steely-eyed roustabout George Briggs peering out from behind her, who comes to own the unconventional narrative.

In Briggs’s case, “Homesman” is doublespeak for “claim-jumper” since the house that he briefly occupies early in the story belongs to another man who may or may not return to live in it. Somehow “The Squatter” wouldn’t have had the same ring to it. Locals don’t take kindly to Briggs’s personalized adaptation of “manifest destiny,” which they subscribe to as a justification for killing off the American Indians and stealing their land. Still, this particular bunch of gun-crazy cowboy that run Briggs out of the house he occupies doesn’t have the stomach to kill him outright. They’d rather put a noose around his neck and leave him sitting under a lone tree on a restless horse for nature to impose its lethal sentence. 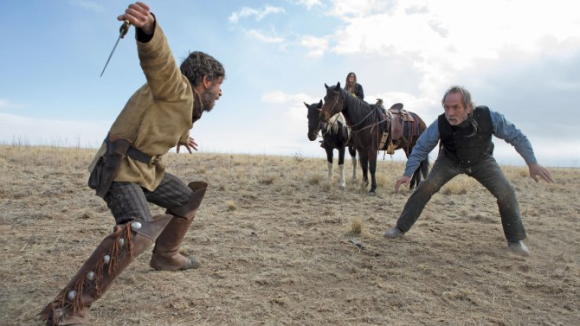 Swank’s Mary Bee Cuddy lives on the outskirts of a small desert town in Nebraska in 1854. At 31-years-old, this admittedly “plain” looking “bossy” woman owns a few acres of land with a house. She has a plan for her future that includes teaming up with a man who shares her vision of economic sturdiness. Cuddy knows how to play piano and has a good singing voice. By now she has polished the businesslike marriage proposal, which she issues to an ill-mannered cowboy she invites over for dinner. He angrily rejects her offer as an open insult after enjoying her hospitality. There isn’t much room in the culture of the day for a woman as direct and strong-willed as Mary Bee Cuddy.

A strange phenomenon grips Cuddy’s community. Inexplicably, there has been a recent spate of insanity spreading among the local women. Diphtheria has claimed the lives of three infants belonging to the inconsolable Arabella Sours (Grace Gummer). Theoline Belknap (Miranda Otto) throws her newborn infant down the outhouse hole, and Gro Svendsen (Sonja Richter) must be kept tied down lest she kill whomever she gets her hands on since the death of her mother. The local clergyman (John Lithgow) decrees that the women be transported east to Iowa to be cared for by the compassionate wife of a Methodist minister.

“People talk about death and taxes, but no one talks about crazy.” There is no room on the prairie for the mentally disabled. That America remains woefully unable to care for the mentally ill segment of its population, more than a 150 years later, speaks to a deep-seated problem in our culture.

When the time comes for someone to step up to transport the women across several weeks’ worth of dangerous terrain, only Cuddy volunteers. To the local women, Cuddy’s thorny place in their society aligns her with the mentally fragile cargo she agrees to shepherd. Equipped with a custom-built horse drawn paddy wagon Cuddy comes across Mr. Briggs in his darkest hour. She agrees to free the roughneck from his death sentence if he will accompany her to Iowa to help deliver the heretics to safety. No sooner has she freed him does Briggs make a mockery of their arrangement, stating that he is will do as he pleases toward their destination. Cuddy wisely baits the hook by “mailing” his payment ahead to him in Iowa. 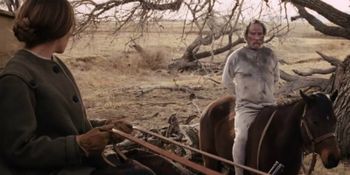 The episodic road story that follows takes on a Homeric quality. The female prisoners wail constantly, referencing the sirens of The Odyssey. They beckon Cuddy to join them. She can’t take it. While Briggs (clearly not his real name) remains aloof to their cries, Cuddy finds temptation in death. When they come across an unkempt grave, she insists on staying behind to repair it while Briggs goes ahead with the women. This split signifies not only a break between Cuddy and Briggs, but also a dramatic occurrence of disorientation for Cuddy that takes an unseen toll on her.

Much has been made about “The Homesman” being a feminist film. Inasmuch as it features dilemmas endured by women in the Old West, the movie is really about differences between the way men and women deal with expectation and loss.
George Briggs is a ruthless survivor. He never wavers from his priority of looking out for himself. He has a sense of justice that he will deliver without so much as a second thought. If he has something to share, he is likely to give it to a member of the fairer sex.

Cuddy is a negotiator. Her attempts to live up to society’s expectations make her vulnerable in ways that never come up in George Briggs’s experience. Each is susceptible to similar and different dangers, many of which they bring upon themselves. Here is a neo-Western you’ll have to watch a few times in order to decide which is which. 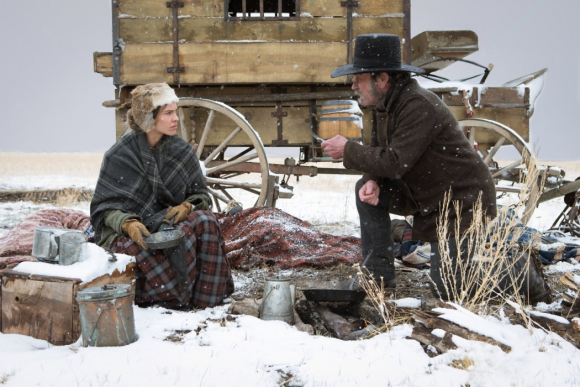